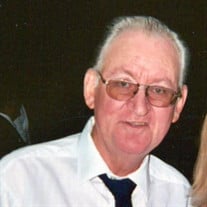 Richard Eugene Barger, age 74, of Albia, passed away on Friday, September 17, 2021, at MercyOne Medical Center in Des Moines, Iowa. Richard was born on September 20, 1946, to Eugene and Letha (Lane) Barger in Centerville, IA. He was united in marriage to Bonnie Lou Parcel on December 4, 1984, in Unionville, Missouri, and to this union two daughters Letha and Sharon were born. Richard and Bonnie were married until her passing in March of 2010. Richard worked as a roofer in his 20s and 30s. He then went onto repairing cars and lawn mowers. Richard enjoyed hunting for deer and rabbits. Bonnie loved to have Richard going fishing or hunt pheasants, as those were two of her favorite foods. He loved to tease people and go for coffee as well. Richard was very devoted to his faith, he loved his God Jehovah and attended weekly services. He also studied his Bible often and enjoyed talking to others about the Bible in his ministry. Richard looked back with fond memories of his field ministry with Calvin Stewart, of Leon. Richard enjoyed traveling around to neighboring towns and regularly going to Oskaloosa with his brothers and friend to go out to eat. Above all else, Richard loved his family, being married to the love of his life Bonnie and their two girls. Sharon was known to be Richard’s shadow. Richard lived with his daughter Letha for many years and they shared a dog named Mia, or Mutt as he would call her sometimes, whom he loved dearly. Richard had a huge heart and considered the Stewart family of Southern Iowa as his own. Richard is survived by his 2 daughters, Letha of Albia, and Sharon (Jamie) Terrell of Chariton. He is also survived by one brother, Jimmy of Eddyville. He was preceded in death by his wife, Bonnie; his parents, Eugene and Letha; and a sister Carol. A Memorial Service will be held at a later date. A memorial has been established to the family.

Richard Eugene Barger, age 74, of Albia, passed away on Friday, September 17, 2021, at MercyOne Medical Center in Des Moines, Iowa. Richard was born on September 20, 1946, to Eugene and Letha (Lane) Barger in Centerville, IA. He was united... View Obituary & Service Information

The family of Richard Eugene Barger created this Life Tributes page to make it easy to share your memories.

Richard Eugene Barger, age 74, of Albia, passed away on Friday,...

Send flowers to the Barger family.