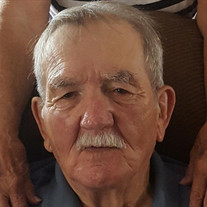 Richard B. “Rich” Allison, age 79, of Iconium, passed away Friday, November 25, 2016, under the care of Hospice of Central Iowa at his home. Richard was born July 26, 1937, to Donald D. and Helen A. (Brown) Allison in Chicago, Illinois. He joined the United States Navy in 1955 and served his country until 1958. During his time in the Navy, he completed his G.E.D. On December 17, 1955 he was united in marriage to Janice Montgomery in Chariton, Iowa. To this union four children were born, Nancy, Michael, David, and James. Richard was an excellent woodworker and also did general construction. He was a member of the American Legion of Albia Howard Cessna Post 136. Richard enjoyed hunting, fishing, attending auctions, collecting antiques, reading, and gardening. His real joy in life was spending time with his friends and family. Richard is survived by his wife, Janice Allison; a daughter, Nancy Allison, three sons, Michael, David, and James Allison; two granddaughters, Megan (Dustin) Schakel and Sheila (Todd) Sundquist; and six great grandchildren. He is also survived by many nieces and nephews. He was preceded in death by his parents, Donald and Helen; and two sisters, Patricia and Cheryl and friend, Juke Frazier. A memorial service will be held at 7:00 p.m., Friday, December 2, 2016, at the Tharp Funeral Home with Pastor Richard Grimes officiating Visitation will be held from 5:00 p.m. until the service time at 7:00 p.m. Friday, December 2, 2016, at Tharp Funeral Home with Richard’s family present. Memorials have been established to the American Legion of Albia or Hospice of Central Iowa.

The family of Richard B. "Rich" Allison created this Life Tributes page to make it easy to share your memories.

Send flowers to the Allison family.