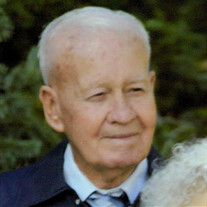 Reese Thomas, Jr., age 90, of Albia passed away June 4, 2016, at Mercy Medical Center in Des Moines. Reese was born May 18, 1926, in Monroe County to Reese Thomas, Sr. and Thressia (McKenny) Thomas. He was united in marriage to Lois Jean Cooper on February 13, 1947. To this union came four children, William, Jean, Terry, and Danny. Reese started working in coal mines in Monroe County at the age of 15 along with his father. He was drafted into the US Army in 1944 and honorably discharged in 1946. He worked for Newman Brothers in Des Moines for many years, retiring in 1988 at the age of 62. Reese loved to travel, taking his family on many vacations to Colorado. Upon his retirement, he and the love of his life enjoyed wintering in San Juan, Texas, in their fifth wheel camper. He is survived by his wife, Lois; his four children, William (Deb) Thomas of Albia, Jean (Gary) Herr of Fremont, Terry (Cricket) Thomas of Eddyville, and Danny (Marla) Thomas of Oskaloosa; eleven grandchildren, Lori, Jason, Tammy, Rusty, Jon, Terry Jr., Angie, Candace, Ashley, Alicia, and Cody; twenty-two great grandchildren; and one great-great grandchild. He was preceded in death by his parents; six sisters, Hannah, Margaret, Ada, Ruth, Mary Ann, and Violet; and two brothers, Billy and Evan. Visitation will be held from11:00 a.m. until 8:00 p.m. on Tuesday, June 7, 2016, at the Tharp Funeral Home with Reese’s family present from 5:00-8:00 p.m. Funeral services will be held Wednesday, June 8, 2016, at 10:30 a.m. at the Tharp Funeral Home in Albia. Burial with military rites provided by the American Legion of Albia, Lovilia, and Melrose will be in the Oak View Cemetery in Albia. Memorials have been established to Circle of Life Hospice or to the American Cancer Society.

Reese Thomas, Jr., age 90, of Albia passed away June 4, 2016, at Mercy Medical Center in Des Moines. Reese was born May 18, 1926, in Monroe County to Reese Thomas, Sr. and Thressia (McKenny) Thomas. He was united in marriage to Lois Jean... View Obituary & Service Information

The family of Reese Thomas, Jr. created this Life Tributes page to make it easy to share your memories.

Send flowers to the Thomas family.