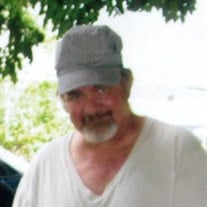 Randy Dwayne Pope, age 64 of Ottumwa, passed away on Thursday, July 23, 2020 at Iowa Methodist Hospital in Des Moines. Randy was born on August 6, 1955 to Jack and Lillian (Martin) Pope, at the hospital in Oskaloosa, Iowa. Randy grew up and attended school in Albia, graduating with the Class of 1973. He then went to welding school at Indian Hills Community College in Ottumwa. On February 14, 1975, Randy was united in marriage to Deb Price at the Trinity United Methodist Church in Albia, and to this union, a son, Greg, was born. Randy and Deb later divorced. Randy married Sherri Carter and they later divorced. Randy worked at Clow Valve Company in Oskaloosa, then as a welder for Van Gorp Corporation in Pella before becoming a truck driver. He then worked as a welder at Vermeer before going to work for the railroad. Randy was very active and loved competition. In his younger years, he wrestled and played high school baseball. Randy loved to box and competed in over 50 boxing fights as well as competed in MMA fights. He used to go to the prison in Fort Madison to box with the inmates and holds the record for the fastest knock out in his division in Missouri. Randy was adventurous and enjoyed motor cross and strip mine climbing on dirt bikes. Randy enjoyed playing sports, including slow pitch softball and Frisbee golfing, and was an avid Cubs fan. Randy was also an avid outdoorsman who enjoyed hunting, fishing, mushroom hunting, as well as riding his Indian motorcycle. He was a good cook and enjoyed canning from his garden. He also enjoyed having coffee with buddies at the mechanic shop. Randy is survived by his son, Greg Dye of Cedar Rapids, IA; a grandson, Ryan Dye; 4 brothers, Charlie Pope of Southern Nevada, David (Lisa) Pope of Elkader, IA, Merle (Karen) Pope of Topeka, KS; and Terry (Marisol) Pope of Des Moines, IA; and a sister, Vivian Lawrence of Albia, IA. Randy is also survived by several nieces, nephews, cousins and good friends. He was preceded in death by his parents, Jack and Lillian Pope; his companion, Peggy Miller; a brother, Steven Pope; and a niece, Jackie Lawrence. Visitation will be held from 4:00 p.m.-8:00 p.m., Monday, July 27, 2020, at the Tharp Funeral Home in Albia, with Randy’s family present throughout to greet family and friends. Funeral services will be held at 10:30 a.m., Tuesday, July 28, 2020 at the Tharp Funeral Home in Albia with Pastor Richard Grimes and Pastor Roger Henry co-officiating. Burial will follow services at Liberty Cemetery in Bussey, IA. A memorial has been established to the Monroe County Little League/Jack Pope Field.

The family of Randy Dwayne Pope created this Life Tributes page to make it easy to share your memories.

Randy Dwayne Pope, age 64 of Ottumwa, passed away on Thursday,...

Send flowers to the Pope family.