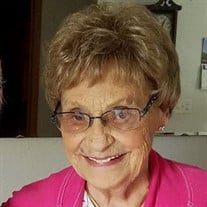 Phyllis Imogene Kaster Williams, age 88, of Albia, passed away on Friday, October 4, 2019, at the Newton Health Care Center in Newton, IA. Phyllis was born on December 3, 1930 to Virgil and Hazel (Jones) Kaster of Moravia, IA. She grew up and attended the Moravia High School where she was proficient in the game of basketball. She loved it and while she may have been the smallest player on the team, she was by far one of the fastest and quickest. She graduated from Moravia High School in 1948. After high school, Phyllis worked for Gambles in Albia where she met the love of her life, Dale Williams. On January 15, 1950 she was united in marriage to W. Dale Williams at the home of her parents in Moravia. To this union 4 children were born, Connie, Debbie, Bobby and Ron. They shared over 38 years of marriage together and during a lot of that time, Phyllis worked at Chamberlain Manufacturing until the factory closed. She lost her beloved Dale on October 14, 1988. At that time Phyllis moved from the farm on Hocking Hill (Albia, IA) into town where she worked the supper shift in the kitchen at the Monroe County Care Center. Phyllis was a member of Trinity United Methodist Church in Albia. She enjoyed her morning coffee gatherings at the local Hardee’s where she’d meet up with friends. She loved to laugh and had the most wonderful and clever sense of humor. The staff at the Newton Health Care Center adored her and will miss their Nanny, as they all called her. Above all, she enjoyed spending time with her family, attending ballgames, playing cards, watching and cheering on the Iowa Hawkeyes, and holding new great grandbabies as the family grew. Left to cherish Phyllis’s memory are her children, Connie (Steve) Swanson of Lee’s Summit, MO, Debbie (Loren) Kitchenmaster of Ardmore, AL, Bobby (Suzie) Williams of Newton, IA and Ron (Kim) Williams of Des Moines, IA; eight grandchildren, Kelli (O’Neill) Kelly of Excelsior Springs, MO, Kevin O’Neill (deceased), Kacee (O’Neill) Gibson, Lee’s Summit, MO, Marnie (Kitchenmaster) Barranco, Colorado Springs, CO, Michael Kitchenmaster, Frazee, MN, Tyler Williams, Newton, IA, Trent Williams, Newton, IA, and Taryn (Williams) Wickliff, Newton, IA; three step grandchildren; seventeen great grandchildren and six step great grandchildren; one great great grandson; as well as numerous nieces and nephews. Phyllis was preceded in death by her husband, W. Dale Williams; her parents, Virgil and Hazel Kaster; her grandson Kevin O’Neill; her sister Jerri Atkinson; and three brothers, Clair, Dale, and Dallas Kaster. Visitation will be held from 2:00 p.m.-8:00 p.m. on Tuesday, October 8, 2019, at the Tharp Funeral Home in Albia, with Phyllis's family present from 6:00 p.m.-8:00 p.m. to greet family and friends. Funeral services will be held at 10:30 a.m. on Wednesday, October 9, 2019, at the Trinity United Methodist Church in Albia, with Pastor Roger Henry officiating. Burial will follow services in Pleasant Corners Cemetery in rural Monroe County. An open memorial has been established and will be determined at a later date.

The family of Phyllis Imogene Williams created this Life Tributes page to make it easy to share your memories.

Send flowers to the Williams family.