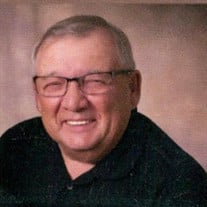 Phillip “Phil” Lee Yenger, age 78, of Albia, passed away on Sunday, August 1, 2020, at Unity Point Health-Iowa Methodist Medical Center in Des Moines, IA. Phil was born on February 6, 1942, to Russell Joseph and Linnie Pearl (McMulin) Yenger near Blakesburg, IA. He grew up and attended school in Albia, graduating with the Class of 1960. On May 19, 1963, he was united in marriage to Shirley Jones at the EUB Church in Lovilia, IA. To this union, 3 daughters were born, Kelly Marie, Kimberly Sue, and Jodi Lynn. Phil and Shirley shared 57 years of marriage prior to his passing. Phil worked at Kness Manufacturing in Albia for 35 years before retiring in 2004. He was a “jack of all trades” there working in different areas including maintenance and assembly. Phil was a member of the Woodworking Club as well as the Southern Iowa Vintage Tractor Club. In his younger years, he enjoyed playing the guitar and singing. He was a very talented woodworker, preferring to work with oak and walnut. He made cedar chests for his daughters, quilt racks, and candlesticks. Phil loved antique tractors, especially his John Deere H. He enjoyed being outdoors, fishing, mushroom hunting, and arrowhead hunting. He also enjoyed John Wayne westerns and watching Nascar. Above all else, Phil’s family was everything to him and he cherished the time he spent with his family and friends. Phil is survived by his wife, Shirley Yenger; 3 daughters, Kelly (Paul Rainey) Yenger, Kimberly (Steve) Hollinrake, Jodi (Randy) Dorage; 3 grandsons, Garrett Joseph (Danielle) Hollinrake, Dylan Luther Dorage, and Phillip Michael Dorage; 2 great grandchildren, Sophia Ann Hollinrake and Kipton Joseph Hollinrake; a brother, Glenn (Jenni) Yenger; and a brother-in-law, Dale Sullivan. Phil is also survived by many nieces, nephews, cousins, and good friends. He was preceded in death by his parents, Russell and Linnie; a granddaughter, Gabrielle Hollinrake; 2 sisters, Jeane (Donald) Billings and Doris Sullivan; and 2 brothers, John (Ruth) Yenger and Frank (Marilyn) Yenger. Visitation will be held from 2:00 p.m.-8:00 p.m. on Wednesday, August 5, 2020, at the Tharp Funeral Home in Albia, with Phil’s family present from 5:00 p.m.-8:00 p.m. to greet family and friends. Funeral services will be held at 10:30 a.m. on Thursday, August 6, 2020, at the Tharp Funeral Home in Albia, with Tom Williamson officiating. Burial will follow services in Oak View Cemetery in Albia. In lieu of flowers, an open memorial has been established to the family to be determined at a later date.

The family of Phillip "Phil" Lee Yenger created this Life Tributes page to make it easy to share your memories.

Send flowers to the Yenger family.