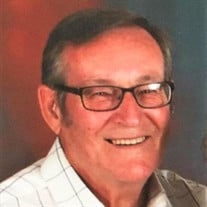 Philip Dean Whitson, age 79, of Albia, passed away on Friday, November 12, 2021, after a hard fought battle with cancer. Phil was born February 16, 1942, to Cecil and Alberta (Sebben) Whitson in Albia. He married Diane G. Smith of Avery at the Albia Methodist Church on December 30, 1967. To this union, 2 children were born, Cheri and Chris. Phil attended Albia High School. After school, he worked various jobs in Albia and then Chicago where he was drafted into the Army in 1964. He served during the Vietnam War as an MP before being honorably discharged February 11, 1966. Phil worked 30 years + 1 day for John Deere in Ottumwa. Phil was a lifetime member of the NRA, the American Legion Post 136, and the VFW of Ottumwa. He was an avid outdoorsman who liked fishing and bow, turkey, and pheasant hunting with his favorite dog, Spook. Phil had the gift of being able to fix or build anything. He was always willing to help friends or family anytime, even if he had to give you a little nudge. Always ornery, even with his illness, he liked to joke and keep his nurses on their toes. Phil is survived by his wife of 53 years, Diane; daughter, Cheri (Jim) Kasella of Elmhurst, IL; son, Chris (Gia Tornabene) Whitson of Albia; grandchildren, Charlie and Olivia Kasella; siblings, Larry (Phyllis) Whitson, Carolyn Plum, and Wayne Whitson, along with a large number of extended family and friends. Phil is preceded in death by his parents, Cecil and Alberta; brothers, Jerry and Steve Whitson; and a brother-in-law, Jim Plum, The family would like to thank all the doctors, nurses, and hospital staff who cared for Phil during his 3 ½ year battle. Visitation will be held from 3:00 p.m.-8:00 p.m. on Tuesday, November 16, 2021, at the Tharp Funeral Home in Albia with Phil’s family present throughout to greet family and friends. Funeral services will be held at 10:30 a.m. on Wednesday, November 17, 2021, at the Tharp Funeral Home in Albia with Pastors Dennis and Teresa Miller co-officiating. Burial with military honors provided by the American Legion O.B. Nelson Post #3 and VFW Post #775 of Ottumwa will follow services at Oak View Cemetery in Albia. A memorial has been established to the Welcome Home Soldier Monument in Albia.

The family of Philip Dean Whitson created this Life Tributes page to make it easy to share your memories.

Philip Dean Whitson, age 79, of Albia, passed away on Friday,...

Send flowers to the Whitson family.