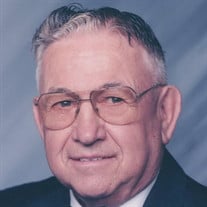 Paul “Dale” Robinson, age 94 of Albia, passed away on Thursday, March 22, 2018, at the Monroe County Hospital in Albia. Dale was born on June 1, 1923, to Paul and Helen Mildred (Giltner) Robinson in Des Moines, Iowa. They moved to Albia in 1927 and he attended grade school at Buxton 18 and through the 8th grade at Washington School in Albia. He graduated from Albia High School in the class of 1942. In high school he was involved in football, band, and music as he loved to sing. During school and after graduation he played trumpet in a dance band. He belonged to the United Brethren Church when he was young and was trumpeter when they went to camp and was the one that got everyone up. He later was a Boy Scout leader and took many local boys to camp. He was Scout Master and Merit Badge Councilor. He later transferred his membership to First Christian Church where he was Youth Director and member of the church board. He went to technical school where he learned to be a machinist and worked at the Rock Island Arsenal until he enlisted in the Army Air Corp. in 1943. He was sent overseas and was stationed just out of London, England at Deenthorpe Air Force Base where he flew 37 missions over Germany with lead crew in B-17 Bombers as radio navigator. He was discharged from Army Air Corp in August of 1945 and came back to Albia. He was married to Maude McGilvery on February 14, 1943, in Unionville, MO. To this union, 3 children were born, Ron, Jim, and Kathy. After coming home from the Army he worked as a machinist at John Deere in Ottumwa for 2 years until he went to work for CB & Q Railroad as a station agent where he was a telegrapher and radio operator. He continued at this work for 35 years. In 1948 he bought a farm east of Albia which he farmed while raising pure bred cattle, hogs and 3000 HyLine Layers as well as working on the railroad. His wife, Maude, died in 1971 and in 1972 he married Martha M. Clark who brought into this marriage 3 girls, Shirley, Janice, and LaRue. They continued to farm her farms and his as well as he continued to work for the railroad until his retirement from the railroad in 1982. He and Martha traveled extensively throughout the United States, Canada, Mexico, and around the world having visited 67 different countries with the Dallas and Polly McGinnis Tours. He was a member of American Legion and VFW. He became a Mason and belonged to the Astor Lodge of Albia and joined the Order of Eastern Star in Albia Chapter. They were heavily involved in Eastern Star work and he was Worthy Patron of Eastern Star in Albia for 16 years and later held other offices every year since joining. He was appointed Grand Sentinel of the State of Iowa Order of Eastern Star in 1994. In 1996 he was elected Associate Grand Patron and 1997 Worthy Grand Patron of the State of Iowa. He also served on the International Temple Board in Washington, DC for 3 years for General Grand Chapter of the world. He was a member of Royal Arch Chapter, Triad Council of Royal and Select Masters, and Zerubbabel Commandery of Knight Templar of Albia. He also belonged to Order of High Priesthood, Order of Thrice Illustrious Masters, Past Commander’s Association, York Rite College, KYCH, and Priestly Order of the Temple, which he was still an officer at present. In 2000 he was appointed Grand Warder of Grand Commandery of State of Iowa and in 2001-2002 he was elected Captain General of Grand Commandery Knights Templar of Iowa and proceeded up the line until he was Grand Commander Knights Templar State of Iowa in 2004-2005. He loved horses which he was been involved with since a very early age and owned a Quarter horse, Rocky, which he still rode. He leaves to mourn his 2 sons, Ron (Judy) Robinson of Agency and Jim Robinson of Joliet, IL; 4 daughters, Kathy (David) Collins of Conyers, GA; Shirley (Tom) Meyer of Des Moines, Janice Clark (Rod Perry) of Greentop, MO, and LaRue (Paul) Russell of Kalamazoo, MI; 11 grandchildren, Bobbie (Phil) Remmark, Kellie (Mike) Davis, Dale (Kim) Robinson, Suzanne (Mike) Ganzer, Samantha (Eddie) Zamudio, Sarah (Candis) Thomason, Rachel (Ryan) Otwell, Nikki (David) Holveck, Becky (Daniel) Wright, Devon (Mandi) Russell, and Brittany Russell; 1 foster grandchild, Andrè Radojcich; 18 great grandchildren; 5 great-great grandchildren; and 2 sisters, Helen Johnson of Couer’d Alene, Idaho, and Martha Scudder of Flagstaff, AZ. He was preceded in death by his first wife, Maude; his second wife, Martha; his parents, Paul and Mildred Robinson; 2 brothers, Merle and Harold Robinson; 2 sisters, Harriet Zielinski and Mary Lu Sorenson; a daughter-in-law, Nancy Robinson; and a grandson, Scott Robinson. Visitation will be 2-8 p.m., Sunday, March 25, 2018, at the Tharp Funeral Home in Albia, with an Order of Eastern Star Service and Masonic Rites provided by Astor Lodge 505, beginning at 6:00 p.m. Dale's family will be present throughout to greet family and friends. Funeral services will be 11:00 a.m., Monday, March 26, 2018, at the First Christian Church in Albia, with Pastor Lynda Carlson officiating and military rites provided by the American Legion of Albia, Lovilia, and Melrose. Following the services Dale’s body will be cremated with a private family burial at a later date. A memorial has been established to the Burn Treatment Center at the University of Iowa Hospital.

The family of Paul "Dale" Robinson created this Life Tributes page to make it easy to share your memories.

Send flowers to the Robinson family.