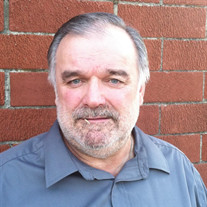 Paul Timothy “E.T.” Flattery, age 68, of Des Moines, passed away Monday, October 30, 2017 at his home in Des Moines, Iowa. Tim was born on June 6, 1949 to Paul J. and Bernice (Flahive) Flattery in Des Moines, Iowa. He grew up and attended the Dowling High School and graduated with the Class of 1967.On June 1, 1974 he was united in marriage to Marcia Lose. To this union two children were born, Tim and Ryan. He and Marcia later divorced. Tim worked at the Northwestern Bell Telephone Company for 20 years before deciding to return to school to learn how to become a welder. Following school Tim worked for TMC. Tim then went to work for a dental lab that produced dental bridges, crowns and dentures. He enjoyed teaching his boys to play hockey and spending time with his family and friends. He is survived by his son, Ryan (Tricia) Flattery of Des Moines; four grandchildren, Gavin, Zachary, Carter and Tori; a daughter-in-law, Nancy Leo and several nieces, nephews, cousins and good friends. Tim is preceded in death by his parents, Paul J. and Bernice; a son, Timothy Flattery and a granddaughter, Hope Flattery. As per his wishes, Tim’s body has been cremated and a private family burial where he will be laid to rest by his parents and grandparents at St. Patrick’s Catholic Cemetery will be held at a later date. Visitation will begin at 4:00 p.m. until 7:00 p.m., Friday, November 3, 2017, at Tharp Funeral Home in Albia with Tim’s family present throughout to greet family and friends. Memorials may be made to St. Patrick’s Catholic Church or St. Patrick’s Cemetery.

The family of Paul Timothy Flattery created this Life Tributes page to make it easy to share your memories.

Send flowers to the Flattery family.