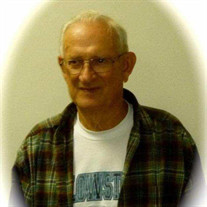 Paul C. Davis, age 81, of Albia, passed away Sunday morning, January 1, 2017, at the Monroe County Hospital in Albia. Paul was born on May 24, 1935, to Handy and Elsie (King) Davis, in Columbia, Iowa. He grew up in Albia and graduated from the Albia High School with the class of 1953. Paul then moved to Newton, IA, to work for the Maytag Company, from which he retired on June, 1, 1988. He met Patty Ann Repp at the Blue Moon Café in Newton and they were united in marriage on December 18, 1954, at the Foursquare Church. Paul and Patty were blessed with three girls, Doris, Rhonda, and Tina. Paul devoted his life to his family, hunting, fishing and camping and enjoyed sitting by the campfire. Death came to Patty on January 30, 1998. On May 1, 1999, Paul was united in marriage to Alice Shaw at St. Mary’s Catholic Church in Albia. At that time, Paul moved back to Albia to reside with Alice. Those left to honor the memory of Paul are his wife Alice (Shaw) Davis of Albia; two daughters, Rhonda (Patrick) Cupples and Tina Davis; three grandchildren, Brian (Heather) Cupples, Angie (Chris) Peery, and Jeffry Trent; three great grandchildren, Mackenzie Cupples, Kennedy Patterson, and Jeffrey Trent II all of Newton; six step children, Debera (Michael) Richmond of Ankeny, Terry (Joyce) Shaw of Albia, Cindy (Bill) Beary of Albia, Karla (Larry) Clements of Muscatine, Vicki (Mike) Watkins of Muscatine, and Becca (Tom) Shoppa of Fruitland; and several step grandchildren and step great grandchildren. Paul is also survived by two sisters, Eva (Don) Kables and Ina (Raymond) Hartman; a brother, Fred (Wauneta) Davis; and many nieces, nephews, and friends. Paul will be missed by many. He was preceded in death by his first wife, Patty; a daughter, Doris; his parents, Handy and Elsie; 2 brothers, Ned and Glen Davis; and a sister, Ada Mae Barnes. A Mass of Christian Burial will be held at 1:30 p.m., Thursday, January 5. 2017, at St. Mary’s Catholic Church in Albia, with Father Michael E. Volkmer, C.PP.S. officiating. Burial will follow services at Memorial Park Cemetery in Newton. A visitation with refreshments will be held from 4 -6 p.m. at the Wallace Family Funeral Home in Newton following the committal service at the cemetery. Visitation will be held from 2 p.m. until 8 p.m., Wednesday, January 4, 2017, at the Tharp Funeral Home in Albia. Paul’s family will be present from 6 - 8 p.m. Wednesday night. A rosary will be led by the St. Mary’s Altar and Rosary Society at 4 p.m. and a Christian Wake Service will be held at 6 p.m. Memorials have been established to the American Heart Association.

Paul C. Davis, age 81, of Albia, passed away Sunday morning, January 1, 2017, at the Monroe County Hospital in Albia. Paul was born on May 24, 1935, to Handy and Elsie (King) Davis, in Columbia, Iowa. He grew up in Albia and graduated... View Obituary & Service Information

The family of Paul Davis created this Life Tributes page to make it easy to share your memories.