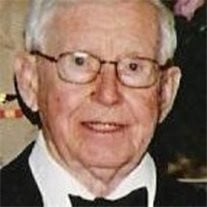 Paul C. Cabell, age 87, of Albia died Wednesday, January 17, 2007 at the Monroe Care Center in Albia. He was born January 10, 1920 to Dr. Guy and Valentine Harris Cabell in Lynchburg, Virginia. Paul attended schools in the Lynchburg area until he was appointed a page to the U.S. Senate by Senator Carter Glass of Virginia. He graduated from Capitol Page High School and entered Virginia Military Institute (VMI) in Lexington, Virginia. He graduated from VMI with a degree in Civil Engineering in 1942. Upon graduation, he was immediately sworn into the U.S. Navy. He served as drill instructor for six months and then joined the Naval Air Corps for flight training. He was in the first night fighters group and was preparing for a tour of duty in Japan when the war ended. His occupation as an engineer resulted in various assignments and moves around the United States and Puerto Rico. In 1991, he retired and moved to Albia. He worked on various committees related to Restoration Days and Albia Community Theatre. He loved playing golf and bridge and had a keen interest in medical research especially in the area of Alzheimer's disease. He married Dorothy Perkins on January 30, 1945 in Florida. He is survived by his wife of Albia; two sons, Paul of New York City, NY and Guy of Bettendorf, IA; one daughter Ann and Mike Stocker of Albia; four grandchildren, Amanda and Erik Herrmann, Matt and Alex Stocker; three great-grandchildren, Devin Herrmann and Case and Cali Stocker. He was preceded in death by his daughter, Nancy; his parents; his brothers, Guy, Wirt and Henry; and his sister, Kitty. A Memorial Service will be held at 2:00 P.M. Saturday, January 20, 2007 at the Winfield Funeral Home in Albia with Pastor Sue Palmer officiating. Burial of cremated remains will be at a later date in Arlington National Cemetery in Arlington, Virginia. Visitation will open after 12:00 P.M. (noon) Friday, January 19, 2007 at the Winfield Funeral Home in Albia with the family present Friday evening from 6-8 P.M. Memorials have been established to the Albia Public Library or to the Monroe County Foundation for maintenance of the walking trail in Albia.

The family of Paul C. Cabell created this Life Tributes page to make it easy to share your memories.

Send flowers to the Cabell family.