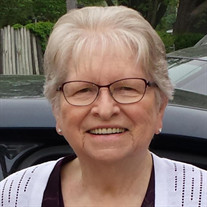 Patricia “Pat” Mae (Chidester) Reed, age 84, of Albia, passed away on Monday, May 24, 2021, at the home of her grandson, Eric (Hettie) Lahart, in Albia, surrounded by her loved ones, under the care of EveryStep Hospice. Pat was born on June 26, 1936, to Dewey and Blanche Chidester. She was raised in the country east of Albia and attended country school before graduating from Albia High School with the Class of 1954. Pat’s first job was selling tickets at the Albia Theatre during high school. She later started her clerical career working for Hugh W. Lundy and Alfred Pabst Law Firms before working at Albia Construction. Finally, she retired from Reed Construction after 34 years of service. Pat married Raymond Reed on June 8, 1957, in Kirskville, MO and raised their 4 children in Albia. Together they celebrated 63 years of marriage prior to his passing. During that time, they watched their family grow to include 14 grandchildren and 20 great grandchildren. Pat loved to read and learn new things. She enjoyed traveling whether it was going to an asphalt convention in Las Vegas or visiting her brother in Wyoming or Alaska. She knew that after each trip she would be greeted at home with a welcome home sign from her grandchildren. She was a huge Iowa Men’s Basketball fan enjoying every game she could watch. She loved celebrating holidays and the traditions that went along with them. Pat was a good sewer in her younger years and later enjoyed crafting. She also enjoyed genealogy and tracing her family through the generations. She loved to bake and share goodies with others. Pat was a great cook and will be remembered for her homemade noodles, mashed potatoes and gravy, marshmallow brownies, and milkshakes. Pat made it a point to learn Facebook and was thrilled to keep up with friends and family. She had a gift for caring for others and when Hettie introduced her to the Hospice volunteer program, it was a perfect fit. She enjoyed reading to clients and cooking and delivering meals. She later became the Hospice Volunteer of the Year. Pat was a charter member of the Eagles Auxiliary where she served as President. She was a lifelong and active member of the First Christian Church in Albia. She faithfully served as board secretary, was on various committees, and taught Sunday school over the years. Pat was excited when they added Grand Camp at the Christian Conference Center in Newton. She had never attended church camp before and experiencing it with the younger grandkids was very special. Later when her kids were taking their grandchildren, she could hardly wait to hear all about it so they could compare notes. Pat is survived by her 4 children: Jim (Rhonda) Reed of Des Moines, Jeany (Don) Marlin of Albia, Roger (Sandra) Reed of Albia, and Velma (Gene) Furlin of Newton; 14 grandchildren, Scott (Ronda) Reed, Amy (J.P.) Channels, Tony (Cat) Furlin, Eric (Hettie) Lahart, Troy Furlin, Craig (Kerra) Lahart, Kelly (Ariel) Reed, Tara (Dan) Sisler, Tyler Furlin, Chad Meinsma, Kerry Reed, Kasey (Lea Kunkel) Reed, Marissa Reed, and Ethan Reed; 20 great-grandchildren; in-laws, Mary Chidester, Sharon Reed, Terry (Carol) Reed, and Randy (Penny) Reed. Pat is also survived by many nieces, nephews, and friends. Pat was preceded in death by her husband, Raymond Reed; her parents, Dewey and Blanche Chidester; siblings, Mary (Walter) Guffey, Bob (Shirley) Chidester, Ed (Jean) Chidester, and Don Chidester; and in-laws, Tobe and Elsie Reed, Bob (Jo’an) Reed, Nellie (Ramon) Osborn, David Reed, and Ronnie Reed. Visitation will be held from 2:00 p.m. - 8:00 p.m. on Thursday, May 27, 2021, at Tharp Funeral Home in Albia with Pat’s family present from 6:00 p.m. until 8:00 p.m. to greet family and friends. Funeral Services will be held at 10:30 a.m., Friday, May 28, 2021, at the First Christian Church in Albia, with Pastor Arlene Johnson and Pastor Lynda Carlson co-officiating. Burial will follow services at Highland Cemetery in Eddyville. Memorials have been established to the First Christian Church in Albia or EveryStep Hospice.

The family of Patricia "Pat" Mae Reed created this Life Tributes page to make it easy to share your memories.