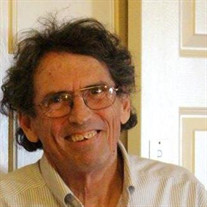 Mark Patrick (Pat) McAdams was born September 2, 1949 to Leda (Fuhs) and Donald McAdams. He died peacefully at home surrounded by family on March 26, 2018, after a short battle with advanced cancer. Pat was a proud and loving father of his two children with Glenda Buenger, Neo and Ben Buenger McAdams. He was a passionate conservationist, whose efforts against the Iowa DOT led to the establishment of the Eddyville Sand Dunes Prairie preserve. He and Glenda shared the 2001 Hagie Heritage Award for their advocacy. Pat’s love of the prairie extended to his home. He and Glenda restored acres of his land to a tallgrass prairie and worked his woodlot into a savannah. Pat always loved to work at home and rarely encountered something he couldn’t fix. Pat joined the faculty of William Penn University, Oskaloosa, Iowa, in 1988. He taught and mentored many students in his career as professor of Earth science. He loved leading field trips and introducing students to rocks and landscapes, especially by canoe in the rivers of southern Missouri. Pat’s open nature and unorthodox views helped him connect with Penn’s diverse student body and positively impact many lives. Pat was a beloved colleague with a close group of faculty friends, and a supporter of Wilcox Library. Pat’s career in geology began at the Iowa State Geological Survey. He was an early adopter of remote sensing and GIS technology, but his proudest accomplishment was his discovery of a fossil vertebrate site at Delta, Iowa, with Bob McKay. It yielded some of the oldest and best preserved primitive amphibians known at the time, and contributed to understanding the transition to vertebrate life on land. In his retirement, Pat loved spending time with his partner of 12 years, Kay Augustine Graham, and his extended family. Pat and Kay were a true team who loved improving their homes and prairie fields, gardening, and roaming the scenic routes of the western landscape. He and Kay were loving grandparents to Lois and Evie, daughters of Brian and Kelly Moore; and Calvin, son of Brad and Priscilla Graham. Pat is survived by Kay Augustine Graham; two children, Neo and Ben (Leann) Buenger McAdams with their mother Glenda Buenger; his mother, Leda McAdams; his three brothers, Steve (Donna), Tony (Luann), and Dan (Sue) McAdams; his nieces and nephews (he was especially close to Don and Lara McAdams); cousins; and other extended family. He was preceded by his father, Donald, in 1999. Pat had open ears and an open heart, and was quick to find a strategy to help family, friends, and students alike with their lives. There will be a celebration of Pat’s life at the Rose Hill Community Center on June 9th, 2018 at noon.

Mark Patrick (Pat) McAdams was born September 2, 1949 to Leda (Fuhs) and Donald McAdams. He died peacefully at home surrounded by family on March 26, 2018, after a short battle with advanced cancer. Pat was a proud and loving father of his... View Obituary & Service Information

The family of Pat McAdams created this Life Tributes page to make it easy to share your memories.

Send flowers to the McAdams family.