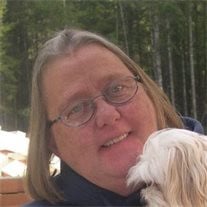 Pamela Mae Glenn-Ulrigg, age 55, of Killeen, Texas, formerly of Albia, passed away Sunday, March 20th, 2016 at her home. Pamela was born in Albia, Iowa on September 5th, 1960, to Richard and Patty (Bequeaith) Glenn. She graduated from Eddyville Community High School, Class of 1978. Pamela served her country in the United States Army from September 3rd, 1986-June 28th, 1996. After serving, she was a homemaker. Pamela married Robert Lee Ulrigg on May 20th, 1994 in Killeen, Texas. Pamela enjoyed being outdoors and spending time at their second home, which they referred to as "The Ranch." Her real joy in life was spending time with her family and friends, especially her grandchildren. Pamela is survived by her husband, Robert; 3 daughters, Jennifer Briggs, Mary Jo Miller, and Amy Ulrigg; 2 sons, Jason (Valerie) Ulrigg and Aaron Ulrigg; 7 grandchildren; one great-grandchild on the way due April 15th; and her mother, Patty. She is also survived by her brothers, Ed (Carol) Glenn and Clu (Deb) Glenn. She was preceded in death by her father, Richard. Funeral service will be held at 11:00 a.m., Monday, March 28th, 2016 at Tharp Funeral in Albia, with Pastor Neil Montz officiating. Burial will follow services at Pleasant Divide Cemetery in rural Monroe County, with military rites provided by the American Legion of Albia, Melrose, and Lovilia. Visitation will be held from 4:00 p.m.-6:00 p.m. Sunday, March 27th, 2016 at the Tharp Funeral Home in Albia, with Pamela's family present throughout. A memorial has been established to the family's wishes.

The family of Pamela Mae Glenn-Ulrigg created this Life Tributes page to make it easy to share your memories.