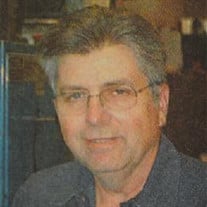 Oliver Wendell Wright Jr., age 71, of Albia, passed away on Sunday, May 7, 2017 at his home in Albia. Oliver was born on November 10, 1945 to Oliver Wendell and Eva Maye (Irelan) Wright in Centerville, Iowa. He grew up and attended school in Moravia, graduating with the Class of 1964. After High School he worked at the Moravia Union Newspaper. On September 10, 1966 he was united in marriage to Janet Lippert at the Unionville Baptist Church in Unionville, Iowa. To this union 3 children were born, Gregory, Shelly and Jeremy. Together, Oliver and Janet enjoyed 50 years of marriage. Oliver worked in Bloomfield for the ABC Newspaper Office in 1966. In 1975 he moved to Albia and continued working for the ABC Newspaper office that later became the Albia Newspaper. In 2016 Oliver celebrated 50 years of working for the newspaper. Oliver was always able to stay busy. He enjoyed taking care of the farm animals in his younger years, being outdoors, mowing the lawn, tinkering on different projects, cheering on the Iowa Hawkeyes, playing on the computer, admiring antique tractors and cars and he especially enjoyed attending his grandchildren’s events. His real joy in life was spending time with his family and friends. Oliver is survived by his wife of 50 years, Janet Wright; two children, Shelly Wright and Jeremy Wright; two grandchildren, Andrew and Alleigh Wright; two sisters, Nancy Wright and Vera (Mack) Byard; three brothers, Marvin (Jewell) Wright, Kenneth (Irma) Wright and Stan Rose Wright. He is also survived by many nieces, nephews and cousins. He was preceded in death by his parents, Oliver Sr. and Eva Wright, a son, Gregory Wright; four brothers, Philip, Curtis, Leslie and Harold Wright and his mother and father-in-law, Rex and Fern Lippert. Funeral services will be held at 10:30 a.m., Friday, May 12, 2017, at the Tharp Funeral Home in Albia. Burial will follow the service at Union Chapel Cemetery in rural Albia. Visitation will be held from 3:00 p.m. – 8:00 p.m., Thursday, May 11, 2017, at the Tharp Funeral Home in Albia, with Oliver’s family present from 5:00 p.m. – 8:00 p.m. to greet family and friends. A memorial has been established to the American Heart Association.

Oliver Wendell Wright Jr., age 71, of Albia, passed away on Sunday, May 7, 2017 at his home in Albia. Oliver was born on November 10, 1945 to Oliver Wendell and Eva Maye (Irelan) Wright in Centerville, Iowa. He grew up and attended school... View Obituary & Service Information

The family of Oliver Wendell Wright Jr. created this Life Tributes page to make it easy to share your memories.

Send flowers to the Wright family.