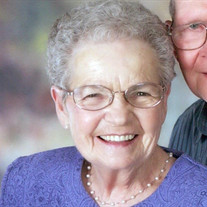 Nancy Lee Henderson quietly left us on the morning of October 21, 2016, at the age 87, to be with her husband of 67 years. Nancy was born May 8, 1929, to Morris and Frances (Van Slyke) Lowenberg in Iowa Falls, Iowa. She graduated from Albia High School with the class of 1947 and furthered her education with one year of college at Iowa State University. On March 20, 1949, she was united in marriage to William “Bill” Henderson at the Methodist Church in Albia. To this union 3 children were born, Linda, Bob, and Virginia. Nancy started her working career at the Albia Light Company and later worked at Peoples National Bank for over 20 years and retired from there. Nancy was a very active member of the Trinity United Methodist Church in Albia where she belonged to many church groups and organizations over the years. She was a member of the United Methodist Women, serving as President for two terms and Vice President. She also served as the UMW Secretary, Treasurer of the Local Church Responsibility, and Martha Circle Treasurer. Nancy served on the Ottumwa Nomination Committee as well as being active in Spiritual Growth, Social Action, Education and Interpretation, Supportive Community, and received special Mission Recognition Pin. She was a member of Stephen Ministries, the Sew and So Club, and was “founder of” the Dancin’ Grannies. Nancy enjoyed flower gardening, sewing, and crafts. Her true joy in life was spending time with family and friends. Nancy is survived by her children, Linda Eubanks, Bob (Jean) Henderson, and Virginia Henderson-Smead; 5 grandchildren, Justine and Adam Eubanks, Aaron (Cassie) Henderson, Nicole (Cody) Myers, and William Smead; and 6 great grandchildren, Bradley Sexton, Wesley Eubanks, Matthew McMahan, Kinsley and Presley Henderson, and Gunner Myers. Nancy is also survived by a brother, Larry (Bonnie) Lowenberg; and several nieces, nephews, and cousins. She was preceded in death by her husband, Bill; her parents, Morris and Frances; a brother, Vance Lowenberg; and a son-in-law, Roy Smead. Funeral Services will be held at 10:00 a.m., Wednesday, October 26, 2016, at Trinity United Methodist Church in Albia, with Pastor Richard Grimes officiating. Burial will follow services at Union Chapel Cemetery in Albia. Visitation will be held from 1:00 p.m. to 8:00 p.m. Tuesday, October 25, 2016, at Tharp Funeral Home in Albia, with Nancy’s family present from 5:00 to 8:00 p.m. A memorial has been established to the Trinity United Methodist Church.

Nancy Lee Henderson quietly left us on the morning of October 21, 2016, at the age 87, to be with her husband of 67 years. Nancy was born May 8, 1929, to Morris and Frances (Van Slyke) Lowenberg in Iowa Falls, Iowa. She graduated from Albia... View Obituary & Service Information

The family of Nancy Lee Henderson created this Life Tributes page to make it easy to share your memories.

Nancy Lee Henderson quietly left us on the morning of October...

Send flowers to the Henderson family.