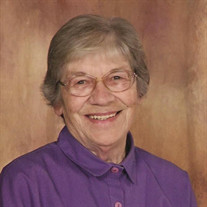 Nadine Partricia Harris passed away May 26, 2016 at the Monroe County Hospital in Albia, Iowa. Nadine was born April 1, 1930 in Washington, Iowa to Oakley and Violet (Beranak) Payne. She graduated from Washington High School in 1948. Her early working days were with the telephone company as an operator. She married Jack D. Harris on June 20, 1953. To this union five children were born. Tony, David, Brian, Greg and Elizabeth. Her married life was spent raising her children in north central Monroe County. She supplemented family income by giving piano lessons to young people in the area. She was a wonderful pianist and spent her free time playing the upright piano in her home. She played for church services in Lovilia, Bussey, Omaha, NE, and at Albia Baptist Temple. She was often called upon to play for funerals and weddings. In her seventies she accompanied many junior high students for their band festivals. She was a hard worker and committed to everything she did. With a pleasing personality she worked and served in many capacities. Her cleaning skills were utilized by many families in the Monroe County area. She enjoyed her retail experiences as much as she did playing the piano for church and students. Nadine is survived by Tony (Kathy) Harris of Arkansas City, KS; David Harris of Lakewood, CO; Brian (Mindy) Harris of Albia, IA; Greg Harris of Kansas City, KS; and Elizabeth (Robert) Kusterer of St. Louis, MO; Two sisters, Gertrude Loder of Washington, IA; and Darlene Adams of Longview, TX; a brother-in-law, Howard Harris of Waterloo, IA; Seventeen grandchildren, sixteen great-grandchildren, and two step great-grandchildren. She was preceded in death by her parents, her husband, one daughter in law, Genette Harris, and one grandson, Gregory Harris Jr. A memorial service will be held June 11, at Albia Baptist Temple located at 624 A Ave West. Visitation from 9:00-11:00, with the service at 11:00 with lunch following. In lieu of flowers, a memorial will be established in her honor to Albia Baptist Temple.

Nadine Partricia Harris passed away May 26, 2016 at the Monroe County Hospital in Albia, Iowa. Nadine was born April 1, 1930 in Washington, Iowa to Oakley and Violet (Beranak) Payne. She graduated from Washington High School in 1948. Her early... View Obituary & Service Information

The family of Nadine Patricia Harris created this Life Tributes page to make it easy to share your memories.

Send flowers to the Harris family.