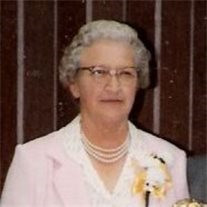 Mildred Mary Feehan, age 96, of Melrose, Iowa died Saturday, January 20, 2007 at Oakwood Nursing & Rehabilitation Center in Albia, Iowa. Mildred was born January 15, 1911 in Melrose, to Frank and Mary (Fitzgerald) Scieszinski. Mildred lived all her life in Melrose. Mildred was a graduate of Melrose High School, class of 1929. She was also a Member of St. Patrick's Catholic Church and St. Patrick's Altar and Rosary both of Melrose. Mildred married Robert B. Feehan at St. Patrick's Catholic Church on May 24, 1932. They were married for 52 years, and were blessed with eight children; Barbara, Donald, Lucille, Robert, Bernard Joseph, Vince, Richard, and Geraldine. Mildred was a homemaker most of her life and had worked at the Russell Produce Company, and the Russell Sale Barn. Mildred is survived by four of her children, Barbara Ruepke of Chariton, Sister Lucille Feehan C.H.M. of Melrose, Bernard Joseph (Joe) Feehan and wife Phyllis of Woodburn, and Vince Feehan and wife Carol of Melrose; 20 grandchildren; 40 great grandchildren; and 9 great-great grandchildren. Mildred is also survived by one sister-in-law, Mary Scieszinski of Chariton. Mildred was preceded by four of her children, Donald (Scrap) Feehan, Robert (Bobby) Feehan and his wife Kay, Geraldine Feehan, and Richard (Dick) Feehan, and his wife Gennie; one son-in-law, Harold Ruepke; one grandson; and one great grandson. Mildred was also preceded in death by her six brothers, Joe, John, Carl, Slyvie, Ed, and Vince Scieszinski, and her two sisters, Margaret Craig and Kathryn Scieszinski. Funeral services for Mildred will be held at 11:00 A.M., Tuesday, January 23, 2007 at St. Patrick's Catholic Church in Melrose with Rev. Rob Lathrop and Rev. Scott Lemaster officiating. Burial will follow at Mt. Calvary Cemetery in Melrose. Visitation will be Monday, January 22, also at St. Patrick's Catholic Church, from 6 to 8:00 P.M., with the family present. A rosary will be led at 7:00 P.M., Monday evening. Memorials may be given to the family and will be directed at a later date. A portion will be given to the Alzheimer's Association

The family of Mildred Mary Feehan created this Life Tributes page to make it easy to share your memories.

Send flowers to the Feehan family.