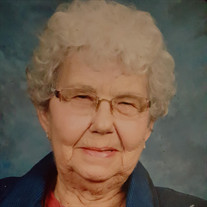 Miladean June Garrett, age 87 of Albia, passed away peacefully on December 27, 2017, at Monroe Care Center in Albia. Miladean was born August 28, 1930, in Montezuma, Iowa, to LeRoy and Maude (Kirby) Bennett. She graduated from Montezuma High School with the Class of 1948. On May 21, 1948 Miladean was united in marriage to William Wesley “WW” Garrett in Montezuma. To this union five children were born, Tom, Dana, Theresa, Kelly and Scott. They shared 41 years of marriage before WW’s passing on November 6, 1989. Miladean was a Homemaker while she raised her children and later she worked for the Good Samaritan Center in Keosauqua for 16 and a half years. She was a member of the United Methodist Church in Corydon. She enjoyed babysitting, cooking, sewing and spending time with her family and friends. Miladean is survived by her children, Tom (Jan) Garrett of Surprise, AZ, Dana (Bill) Shehan of Fort Madison, Kelly (Lisa) Garrett of Arnold, MO, Scott (Kristin) Garrett of Winterset; 14 grandchildren; 14 great grandchildren; and 1 great-great grandchild. She was preceded in death by her husband, Bill; a daughter, Terri Lynn; her parents, LeRoy and Maude Bennett; and a brother, Billie Lee Bennett. Miladean’s body has been cremated according to her wishes and no services will be held. Memorials may be made to Monroe Care Center.

The family of Miladean June Garrett created this Life Tributes page to make it easy to share your memories.

Send flowers to the Garrett family.