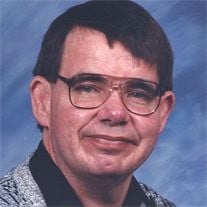 Mike Ballard, age 51, of Albia, Iowa died Friday, January 27, 2006 at the Monroe County Hospital emergency room in Albia. He was born July 4, 1954 in Centerville, Iowa to Charles and Grace Ilene (Malone) Ballard. Mike had worked for Tenco Industries in Centerville and Bloomfield and also for Ragtime Industries in Albia. He was affiliated with the Living Hope Bible Church in Eldon, Iowa and enjoyed professional wrestling, King Kong and Godzilla movies, fishing and crocheting. He dearly loved all types of animals. Mike is survived by his brothers and sisters: Carl (Linda) Ballard of Green Castle, MO, Kay (Gary) Lorton of Bloomfield, Jack (Terry) Ballard of Albia, Peggy (Ronnie) Logston of Kirksville, MO, and Becky Ballard of Kirksville, MO. Also surviving are 4 nieces, 1 nephew, and 14 great nieces and nephews and many friends. He was preceded in death by his parents. Funeral services will be held at 10:30 A.M. Wednesday, February 1, 2006 at the Winfield Funeral Home in Albia with Pastor David Albert officiating. Burial will be in the Oakview Cemetery in Albia. Visitation will begin after 5:00 P.M. Tuesday, January 31, 2006 at the Winfield Funeral Home in Albia with the family present from 6-8 P.M. Tuesday evening. Casketbearers will be Bill Brown, Leo Ornduff, Dean Hanna, Ronnie Logston, Raymond Logston, and Rick Rysdam. In lieu of flowers memorials may be made to Ragtime Industries.

The family of Mike Ballard created this Life Tributes page to make it easy to share your memories.

Send flowers to the Ballard family.