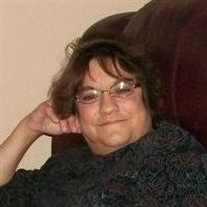 Michelle Rae (Vance) Frazier, age 47, of Albia, passed away on January 5, 2016 at the Mercy Medical Center in Des Moines, Iowa. Michelle was born on October 28, 1969 to Raymond and Merrily (Barnes) Vance in Bloomfield at the Davis County Hospital. She attended Moravia High School graduating with the class of 1988. She went on to receive a degree in computer programming from Indian Hills Community College. On June 8, 2013 she was united in Marriage to Jerry “Groovy” Frazier in Ottumwa. Jerry passed away on February 13, 2015. Michelle worked at Hy-Vee as a computer programmer before taking a job at Principal Financial in Des Moines. She enjoyed being outdoors, fishing, riding horses and had a love for animals, especially her two cats Pinky and Smokey. Her real joy in life was spending time with her family and friends. Michelle was very blessed to have numerous friends that loved and cared for her through many struggles. Michelle is survived by her mother, Merrily Townsend of Blakesburg; a brother, Mark (Teresa) Vance of Altoona; a sister, Stacy Moore (Richard Dulaney) of Centerville nieces and nephews, Candi Vance-Daniels, Nicole Vance, Abigail Vance, Andrew Vance, Annie Moore and Emily Moore; step sister, Teri Townsend of Atlanta, GA; two step brothers, Roger (Sheila) Townsend of Clive, and Gary (Jennifer) Townsend of Des Moines. She is also survived by many aunts, uncles, cousins and step/great nieces and nephews. She is preceded in death by her father, Raymond Vance; a step-father, Donald Townsend; her husband, Jerry “Groovy” Frazier; a brother, Craig Vance and a brother-in-law, Russ Moore. Memorial Services will be held at 3:00 p.m. on Tuesday, January 10, 2017 at the Tharp Funeral Home in Albia, with Pastor John VanWeelden officiating. As was Michelle’s wish her body has been cremated and a private family burial will take place at a later date. Visitation will be held from 1:30 p.m. until service time at 3:00 p.m. on Tuesday, January 10, 2017 at Tharp Funeral Home in Albia, with Michelle’s family present throughout to greet friends and family. Memorials have been established to the family.

Michelle Rae (Vance) Frazier, age 47, of Albia, passed away on January 5, 2016 at the Mercy Medical Center in Des Moines, Iowa. Michelle was born on October 28, 1969 to Raymond and Merrily (Barnes) Vance in Bloomfield at the Davis County... View Obituary & Service Information

The family of Michelle Rae Frazier created this Life Tributes page to make it easy to share your memories.

Send flowers to the Frazier family.