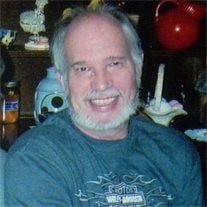 Michael Wayne Davis age 61, of Melcher-Dallas, passed away on Monday, April 11, 2016, under the care of HCI Hospice at his parents' home in Albia. He was born March 21, 1955 to Elmer and Eileen (Stafford) Davis at the Naval Hospital in Portsmouth, Virginia. He graduated from the Albia High School with the Class of 1973. After high school Michael served his country in the United States Air Force from 1973-1977. On August 9, 2008, he was united in marriage to JoAnn "J. J." Jones at the Dallas Christian Church. After serving his country, Michael took a job at the V.A. Hospital in Knoxville until going to work as a truck driver hauling steel and livestock. He lastly worked at Pella Corporation. Michael was a member of the American Legion Howard Cessnar Post #136 of Albia. He enjoyed traveling and was a big fan of the Chicago Cubs, the Green Bay Packers and the Iowa Hawkeyes. He especially enjoyed riding his Harley Davidson Trike with his wife J. J. He is survived by his wife; JoAnn "J. J."; his parents, Elmer and Eileen; 2 brothers, Kevin (Deb) Davis and Chris Davis both of Largo, Florida; a sister-in-law, DeAnn Jones; many uncles, aunts, and cousins and the family dog, Cookie. He was preceded in death by his grandparents, Florence and Lloyd Stafford and Charlie and Mary Davis. A Celebration of Life Service will be held at 2:00 p.m., Wednesday, April 20th, 2016 at Tharp Funeral in Albia, with Pastor Brad Gray officiating. A private family burial will take place at Eslinger Cemetery at a later date. Following services at the funeral home, military rites will be provided by the American Legion of Albia, Melrose, and Lovilia. Visitation will be held from 1:00 p.m.-8:00 p.m. Tuesday, April 19th, 2016 at the Tharp Funeral Home in Albia, with Michael's family present from 6:00 p.m.-8:00 p.m. to greet relatives and friends. A memorial has been established to the family's wishes.

Michael Wayne Davis age 61, of Melcher-Dallas, passed away on Monday, April 11, 2016, under the care of HCI Hospice at his parents' home in Albia. He was born March 21, 1955 to Elmer and Eileen (Stafford) Davis at the Naval Hospital in Portsmouth,... View Obituary & Service Information

The family of Michael Wayne Davis created this Life Tributes page to make it easy to share your memories.

Michael Wayne Davis age 61, of Melcher-Dallas, passed away on...