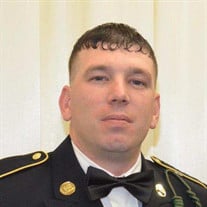 Michael Anthony Townsend, age 32, of Ottumwa, passed away on February 8, 2017, in Oskaloosa, Iowa. Michael was born on January 30, 1985, to Patrick and Dede (Wilson) Townsend at Blytheville Air Force Base in Arkansas. He attended school in Ottumwa until moving to the Eddyville-Blakesburg High School where he graduated with the Class of 2003. He served his country in the United States Army as a combat engineer for 9 ½ years and was stationed in Iraq, Iran, South Korea, Hawaii and several other locations. On October 7, 2010 he was united in marriage to Jolene Torricer at Fort Leonard Wood in Missouri. Michael received his AA degree from Indian Hills Community College in Ottumwa and was currently attending William Penn University to receive his degree in public accounting. In his early years Michael worked as a salesman for the Kirby Vacuum Company. He loved helping his grandfather on the farm. Michael was also employed at Hy-Vee during high school and later he worked Menards. Michael was a member of the Wounded Warrior Project, The Lions Club and The Masons. He enjoyed riding his motorcycle, being outdoors, camping, fishing, hunting, and target practice. His real joy in life was spending time with his family and friends, especially his children. Michael is survived by his wife, Jolene Townsend; his three children, Makayla, Hunter and Lilyana; his parents, Patrick Townsend and Dede (Robert) “Bob” Sherman; his grandmother, Laurine Townsend; a brother, James Townsend; a half-brother, Zack Townsend; step-siblings, Samer Kafawain, Krista Long, Bobby Sherman and Paula Sherman. Michael is also survived by many aunts, uncles, cousins and friends. He is preceded in death by his grandfather, Arthur Townsend; his grandmother, Sue Wilson; his step-mother, Roberta Townsend; his uncle Michael Townsend and his mother and father-in-law, William and Jeanne Torricer. A memorial service will be held at 3 p.m., Saturday, February 18, 2017 at the Tharp Funeral Home in Albia with Pastor Brad Gray officiating. Military honors will be provided by the American Legion of Albia, Melrose and Lovilia. A private family burial will be held at a later date. Visitation will be held from 1 p.m.-3 p.m. Saturday, February 18, 2017 at the Tharp Funeral Home in Albia with Michael’s family present to greet family and friends. An open memorial has been established in Michael’s name.

Michael Anthony Townsend, age 32, of Ottumwa, passed away on February 8, 2017, in Oskaloosa, Iowa. Michael was born on January 30, 1985, to Patrick and Dede (Wilson) Townsend at Blytheville Air Force Base in Arkansas. He attended school... View Obituary & Service Information

The family of Michael Anthony Townsend created this Life Tributes page to make it easy to share your memories.

Michael Anthony Townsend, age 32, of Ottumwa, passed away on...

Send flowers to the Townsend family.