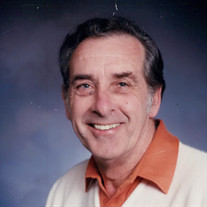 Michael John Lawrence age 87, of Albia, passed away on July 27, 2016, at his home under the care of Care Initiatives Hospice. Mike was born May 23, 1929, in Manchester, England. He graduated from high school in England and served a 7 year apprenticeship for tool and die. Mike served his country in the British Royal Air Force from 1946-1951. On January 5, 1952, Mike was united in marriage to Barbara Elizabeth “Betty” Mazey in Honeybourne, England. To this union two children were born Vicci and Michael. Mike and Betty both left England and moved to Canada with their young daughter Vicci and then to Kent, Ohio in 1959. They arrived in Albia in 1961 and has been their home ever since. Mike worked at Chamberlains as a die maker until starting his own business, L&S Tools in 1966, in Albia retiring in 2006. He also co-founded Hawkeye Molding and Iowa Aluminum in Albia. Mike was a co-founder and influential in helping build the Albia Sports Complex. He received several awards throughout the years. Including Business of the year and in 1985 Mike was named Man of the Year, by Governor Terry Branstad. Mike served on many boards. He was a member of Trinity United Methodist Church of Albia where he served on the trust committee and was the Past President of the Albia Country Club. Mike also served on the Albia Chamber of Commerce for several years, Monroe County Professional Management Board and the A-C-B-C board since 1982. He enjoyed retirement, being outdoors, sailing, golfing, flying, cooking, and traveling. Mike and Betty spent the last 16 winters in Florida. One of Mike greatest joys in life was spending time with family, friends and watching his grandchildren’s sporting events, especially his grand-daughter Jena’s softball teams. Mike is survived by the love of his life of 64 years, Betty Lawrence of Albia; a daughter, Vicci Norman of Ottumwa and a son, Mike (Tonya) Lawrence of Albia; 5 grandchildren, Jesse Norman of Colby, Kansas, Cassie Norman of Ottumwa and Ariel, Macy, Jena Lawrence of Albia; 3 great grandchildren, Kylie Norman, Ricky Monohon and Lilah Norman of Ottumwa. Mike is also survived by several nieces, nephews and numerous friends. He is preceded in death by his Mother, Mary Kiddlington Lawrence. Celebration of Life Service will be held from 11:00 a.m. to 1:00 p.m. with a luncheon that will be held at noon on Friday, August 12, 2016, at Trinity United Methodist Church in Albia with Mike’s family present. In lieu of flowers memorials have been established to the Monroe County Sports Complex, Albia Public Library or to the Albia Booster Club for Softball.

Michael John Lawrence age 87, of Albia, passed away on July 27, 2016, at his home under the care of Care Initiatives Hospice. Mike was born May 23, 1929, in Manchester, England. He graduated from high school in England and served a 7 year... View Obituary & Service Information

The family of Michael "Mike" John Lawrence created this Life Tributes page to make it easy to share your memories.

Send flowers to the Lawrence family.