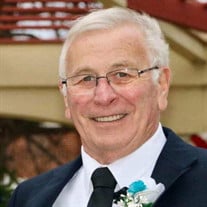 Michael “Mike” K. Freshwater, age 78 , of Albia, IA, passed away on Thursday, November 11, 2021, at his home surrounded by his loved ones. Mike was born on October 28, 1943, to Marion K. and Wilma (Neely) Freshwater in Alliance, Ohio. Mike grew up attending school and graduated from the Albia High School with the Class of 1961. In 1966, Mike was united in marriage to Mary Ann Ciska and to this union, 4 children, were born, John, Michelle, Jennifer, and Michael. Mike and Mary Ann later divorced. On May 19, 2006, he was united in marriage to Rita Porterfield in Unionville, MO. Mike worked at Maloney’s in Albia before going to work for the Iowa State Highway Commission. He also worked at Gibson’s Discount Center and Hormel before lastly going to work for the Monroe County Secondary Roads Department, where he worked for 26 years until his retirement in 2005. Mike was a former member of the Hospital Board of Trustees, serving for 25 years. He was a past President and coach of the Monroe County Little Girls softball league. He coached the Albia Babe Ruth Royals for a total of 19 years, 15 of those years with his good friend, John Cardenzana, while also serving those 19 years on the Rathbun Babe Ruth Board of Directors. Mike enjoyed going to the races with the boys and Tom Romanco, attending car shows with Joe Nucko, and attending his children’s and grandchildren’s sporting events, either as coach or spectator. Mike’s family was everything to him and he cherished the time he spent with his children and grandchildren, as well as his wife, Rita, who was also his best friend. Mike is survived by his wife, Rita of Albia; 4 children, John (Pam) Freshwater of Albia, Michelle (Todd) Mihalovich of Centerville, Jenny (Kelly) Romanco of Albia, and Michael (Sherry) Freshwater of Moulton; 2 stepdaughters, Alicia Sivelle of Killeen, TX and Stacey (Rick) Bretches of Ephrata, Washington; 10 grandchildren, Colton Mihalovich, Shaelynn Freshwater, Ryan Romanco, Hannah Romanco, Bret Freshwater, Creighton Mihalovich, Macey (Chad) Lathrop, Carly Mihalovich, Andrew Wright, and Ann Marie Freshwater; 3 step grandchildren, Zackary Sivelle, Bryan Sivelle, and Joey Erwin; and his siblings, Gary (Renee) Freshwater of Albia, Carolyn Miller of Alliance, OH, and Patty VanWeelden of Albia. Mike is also survived by several in-laws, nieces, nephews, good friends, and his dog, Mac. He was preceded in death by his parents, Marion K. and Wilma Freshwater; and brothers-in-law, Don Miller and John VanWeelden. Visitation will be held from 9:00 a.m.-1:00 p.m. on Tuesday, November 16, 2021, at the Tharp Funeral Home in Albia, with Mike’s family present to greet family and friends. A memorial service will be held at 1:00 p.m. on Tuesday, November 16, 2021, at the Tharp Funeral Home in Albia with Father Mark Yates, C.PP. S. officiating. Burial will follow services at Oak View Cemetery in Albia. In lieu of flowers, an open memorial has been established to the family.

The family of Michael "Mike" K. Freshwater created this Life Tributes page to make it easy to share your memories.

Send flowers to the Freshwater family.