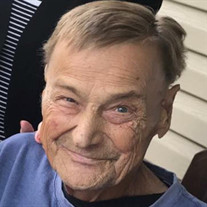 Beloved brother and uncle (Mick) Michael John Papich, 74, passed on Tuesday, October 24th at the Monroe County hospital with family at his side. Mick was born August 19, 1943 in Lovilia, Iowa to the late David Edward and Elna Lucas Papich. Mick grew up with his six brothers and sisters working at their family owned Papich Sundries drugstore. He graduated from Lovilia High School in 1961. He attended Indian Hills Community College and worked at White’s Construction in Des Moines, Alcoa Aluminum in Davenport and various other jobs. He was a member of the U.S. National Guard. Mick enjoyed the outdoors and spent time hunting, fishing, mushroom hunting, playing guitar and vacationing. Most of all he looked forward to spending precious time with his brothers and sisters and was never happier than when visiting with his nieces and nephews. He is survived by sisters, JoAnne Papich-Feldmann, Marlene Papich (Bob) Terrell and Mary Jo Papich and Connie (Joe) Sinnott; sister-in-law, Bette Papich. He is also survived by 16 nieces and nephews: Scott, Melanie, Sean, Tony, Mike, Stephanie, Danny, Angie, Phil, Jeff, Julie, James, Diana, Maria, Dave, Tom; many great nieces and nephews and many friends in Lovilia, Albia and at Bree’s Home. He was preceded in death by his parents, Elna and David Papich; brother Danny; brother Leonard; a sister-in-law, Lenore Papich; nieces Jennifer Susan Terrell; and great niece Gabriella Marie Sinnott. A Mass of Christian Burial will be held at 11:00 a.m., Saturday, October 28, 2017 at St. Mary’s Catholic Church in Albia, with Father Michael E. Volkmer C.PP.S. officiating. Burial with military rites will be provided by the American Legion of Albia, Lovilia and Melrose will follow services at St. Mary’s Cemetery in Albia. Visitation will be held from 3:30 p.m.- 7:30 p.m. Friday, October 27, 2017 at the Tharp Funeral Home in Albia, with Mick's family present from 4 to 7:30 p.m. A 4:00 p.m. rosary will be led by St. Mary’s Altar and Rosary Society and a wake service will be held at 6:00 p.m., with family sharing A memorial has been established to the Welcome Home Soldier Memorial.

Beloved brother and uncle (Mick) Michael John Papich, 74, passed on Tuesday, October 24th at the Monroe County hospital with family at his side. Mick was born August 19, 1943 in Lovilia, Iowa to the late David Edward and Elna Lucas Papich.... View Obituary & Service Information

The family of Michael "Mick" John Papich created this Life Tributes page to make it easy to share your memories.

Send flowers to the Papich family.