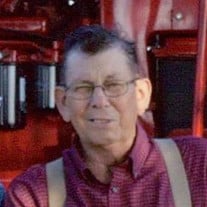 Michael Lee Lathen, age 70, of Albia, passed away on Tuesday, April 18, 2017 at Mercy Medical Center in Des Moines. Mike was born on January 15, 1947 to Gene and Mary Ellen (Ellison) Lathen in Centerville, Iowa. He grew up attending schools in Moravia and Albia graduating from Albia High School with the Class of 1965. He enrolled at a college in Nashville, Tennessee for auto diesel mechanic education. Mike worked for Gibbs Cook in Des Moines before being drafted and serving his country in United States Navy Seabees mobile construction battalion #133 during the Vietnam War. On November 5, 1967 he was united in marriage to Irene Stewart at the Presbyterian Church in Albia. To this union 3 children were born, Roger, Jeff and Carrie. Mike worked in Ottumwa at the International Harvester dealership as a truck mechanic. He also worked for Clifford Belzer and Monroe County Truck Implement in Albia. In 1977 he starting farming full time and also ran Mikes Tractor Repair before going to work for Oskaloosa Implement. He returned to running and operating his tractor repair company until retiring at the age of 65. He was a member of the Trinity United Methodist Church in Albia and played Andrew in the living disciples of the last supper for many years. He was also a member of Southeastern Iowa Tractor Club where he enjoyed the plowing days competition, he was a 4-H leader and a member of the Monroe County Pork Producers. He enjoyed being outdoors, attending his grandchildren’s sporting events and spending time in the fields, farming. His real joy in life was spending time with his family and friends especially his grandchildren. Mike is survived by his wife, Irene Lathen of Albia; his three children, Roger (Jennifer) Lathen of Fremont, Jeff (Jennifer) Lathen of Albia, and Carrie (Chris) Wirtjes of Albia; six grandchildren, Clayton, Rylie, Paige, Emma, Blake, Isaiah and a set of twins on the way; a brother, Mark (Kim) Lathen of Sioux Falls, SD and two uncles, Merv and Kenny Ellison. He is preceded in death by his parents, Gene and Mary Ellen Lathen; his grandparents, Frank and Bertha Lathen and Roy and Bernice Ellison. Funeral services will be held at 10:30 a.m., Monday, April 24, 2017, at the Trinity United Methodist Church in Albia, with Pastor Roger Henry officiating. Burial with military rites provided by the American Legion of Albia, Melrose and Lovilia will follow the service at the Mount Pleasant Cemetery south of Albia. Visitation will be held from 1:00 p.m. until 8:00 p.m., Sunday, April 23, 2017, at the Tharp Funeral Home in Albia, with Michael’s family present from 5-8 p.m. to greet family and friends. An open memorial has been established and will be determined at a later date.

The family of Michael Lee Lathen created this Life Tributes page to make it easy to share your memories.

Michael Lee Lathen, age 70, of Albia, passed away on Tuesday,...

Send flowers to the Lathen family.