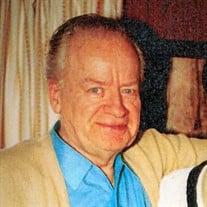 Merle Montgomery Illingworth Jr., age 93 of Albia, entered into eternity with the Lord Monday, December 20, 2021, at the Ottumwa Regional Health Center. Merle was born July 30, 1928, to Merle Montgomery and Thelma Marie (Lowe) Illingworth in Grinnell, IA. He married Marilyn Edith Kester on June 15, 1947, at First Christian Church in Albia. To this union two children were born, Marc and Mari. They shared 66 years of marriage before her passing on January 9, 2014. Merle graduated from Albia High School, class of 1946 and then went to Elgin Watchmaking School in Elgin IL where he was the only one to receive an A+ in watchmaking. He was also a GIA certified gemologist. Merle also had his pilot license since 1945 and was considered a “salty dog.” Merle and Marilyn opened Illingworth’s Jewelry in August 1947, shortly after getting married and were in business for over 66 years they worked side by side with Marilyn doing the bookkeeping. Merle enjoyed working on watches and clocks and buying cars. Merle enjoyed playing the coronet and singing in the choir and he had an amazing tenor voice as music was a hobby of his. He enjoyed sharing God’s word with people to make sure that they were saved and knew God. He was a very kind and intelligent man. Merle loved Cadillacs and cars were a big hobby his entire life. He used to buy Cadillacs and drive them to California to sell them for profit back in the 1960’s when cars were hard to come by in California. Merle is survived by his two children, Marc Illingworth of Indianola and Mari Illingworth of East Moline, IL; three grandsons, Andy (Angela) Illingworth of Indianola, Adam (Jennifer) Illingworth and Nickolas (Bailey) Illingworth both of Des Moines; and three great grandchildren, Drew, Carter, and Jude Illingworth. He was preceded in death by his wife, Marilyn and his parents, Merle and Thelma, his sister Virginia Holden Crabb, his brother Jack Illingworth and his brother Ron Illingworth. Visitation will be held from 3:00 p.m.-7:00 p.m. on Wednesday, January 5, 2022, at the Tharp Funeral Home in Albia, with Merle's family present throughout to greet family and friends. Funeral services will be held at 10:30 a.m. on Thursday, January 6, 2022, at Trinity United Methodist Church in Albia; with Pastor Dave Clark and Pastor Roger Henry officiating. Burial will follow services at Oak View Cemetery in Albia. An open memorial has been established to the family to be determined at a later date.

The family of Merle Montgomery Illingworth Jr. created this Life Tributes page to make it easy to share your memories.

Send flowers to the Illingworth family.