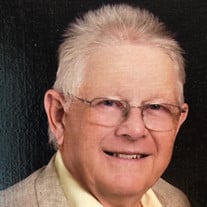 Melvin Roy Campbell, age 90, of Albia, passed away on Tuesday, September 8, 2020, at the Monroe County Hospital in Albia. Melvin was born on August 6, 1930, to Armund A. and Emma (Wells) Campbell in Lake City, Iowa. Melvin grew up and attended school in Lake City before attending Iowa State University where he obtained his degree in Agriculture. On June 15, 1952, he was united in marriage to Evelyn Irene Beem in Holly Springs, Iowa. They shared 68 years of marriage prior to his passing. Melvin was a gallant soldier in the Korean War where he served as an instructor at the base on Eta Jima, Japan for two years. After returning from the war, he began to work his lifelong passion, farming. He farmed in the Lake City area for 35 years before moving to Albia in 1986. Melvin was innovative and inventive and known for his unique problem solving skills. He could fix anything and saved his family and friends many repair bills. He delighted in serving his fellow man and often would meet others’ needs before his own. At family dinners and church suppers, Melvin would come into the kitchen to help and hang out with the ladies. He knew where the fun was. He loved any chance to celebrate and gather for a good time. His gardening skills were extensive and his harvests huge. Gathering dishpans full of wild asparagus from road ditches was a special treat that he graced the family table with each spring and filled their freezers for the coming winter. Melvin had his favorite television preachers but loved attending worship in person on Sundays. Singing the hymns of faith were a special part of his worship experience. We know he is enjoying the choirs of heaven. Any song sung by George Beverly Shea was his favorite and he would sing along with gusto. He taught Adult Sunday School and led the Deacons in more than one congregation over the years. His children thank him for taking them to church where they all met Jesus as Savior at an early age. His loved ones will miss his joking and orneriness. His excitement and zest for life made him fun to be around. He loved his wife of 68 years, his kids and grandkids. Life was good for Melvin, but his family is sure Heaven is even sweeter. See you soon, Daddy. Melvin is survived by his wife, Evelyn Campbell; a daughter, Carol (Larry) May and their children, Victoria (Gregory) Thorne and Michelle (Matthew) Rabinowitz; a son, Russel (Stephanie) Campbell and their children, Brent (Jaclyn) Campbell and Corinne (Matthias) Niska; a daughter, Jeanne (Steve) Crall and their children, Audreanna Lambert, Brittney Crall and Katelyn Crall; 10 great grandchildren; and a twin sister, Mary Lou Morrison. He is preceded in death by his parents, Armund and Emma Campbell; and 2 brothers, Robert and Walter Campbell. Per Melvin’s wishes, his body has been cremated. A memorial service will be held at a later date as well as a private family burial at the Fayetteville National Cemetery in Fayetteville, AR. An open memorial has been established to the family.

Melvin Roy Campbell, age 90, of Albia, passed away on Tuesday, September 8, 2020, at the Monroe County Hospital in Albia. Melvin was born on August 6, 1930, to Armund A. and Emma (Wells) Campbell in Lake City, Iowa. Melvin... View Obituary & Service Information

The family of Melvin Roy Campbell created this Life Tributes page to make it easy to share your memories.

Melvin Roy Campbell, age 90, of Albia, passed away on Tuesday,...

Send flowers to the Campbell family.