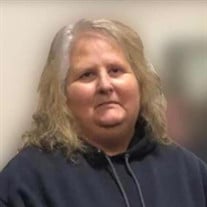 Melinda Sue Stewart, age 58, of Albia, passed away on Wednesday, January 19, 2022, in Albia, Iowa. Melinda was born on March 27, 1963, in Iowa City, IA, to Robert “Bob” and Jean (Squires) Frye. She grew up attending school in Albia, graduating with the Class of 1981. Melinda later went to nursing school and obtained her RN degree. In 2005, Melinda was united in marriage to James Stewart at the Trinity United Methodist Church in Albia. Melinda was a nurse and homemaker. She took pride in her work and enjoyed taking care of others. Melinda loved her family and cherished the time spent with them. Her true joy in life was taking care of her children and grandchildren. Melinda is survived by her husband, James Stewart; her children, Curtis Walker, Corey (Michaela Grupe) Walker, Austin (Astilbe Lamb) Stewart, and Roger Stewart; 7 grandchildren; her father, Robert Frye; a sister, Lisa (Todd) Willis; a sister-in-law, Becky Frye; and her nephews, Tony and Ben Frye and Travis (Nikki) Morr. She was preceded in death by a son, Kyle Walker; her mother, Jean Frye; and 2 brothers, Robert and Ronald. Visitation will be held from 3:00 p.m.-7:00 p.m. on Sunday, January 23, 2022 at the Tharp Funeral Home in Albia, with Melinda’s family present throughout to greet family and friends. Funeral services will be held at 10:30 a.m. on Monday, January 24, 2022 at the Tharp Funeral Home in Albia, with Priest Tammy Batterson officiating. Burial will follow services at Selection Cemetery in Monroe County. An open memorial has been established to the family to be determined at a later date.

The family of Melinda Sue Stewart created this Life Tributes page to make it easy to share your memories.

Melinda Sue Stewart, age 58, of Albia, passed away on Wednesday,...