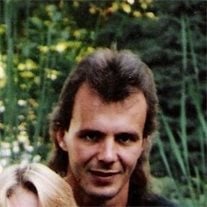 Maverick Dean West, age 44, of Avery, Iowa died Tuesday, September 19, 2006 at his home. He was born August 17th, 1962 in Iowa City, Iowa. On March 10th, 1965, Marion Dean West and Dixie (Nelson) West were given the opportunity to adopt him and raise him as their own son. Soon after, the West and Nelson families had a big shower to welcome the 2 � year boy into the family. A year later, the family moved to Florida to be near family. In 1966, Dixie's brother, Monte Nelson, joined the family and the boys grew up like brothers. In 1970, two cousins, Penny and Diane Conn, also became part of the family and the four children had wonderful years living on a farm. Maverick married Kara Johnson on October 9, 1982 in Carter Lake, Iowa. To this union they were blessed with two children. Their first child, Lindsey Ann West, was born August 17th, 1985. Jeremiah Burton West was born February 12, 1988. Maverick worked in tree service in Omaha, Nebraska and operated his own tree service for the last 15 years in Albia. Any job Maverick had between tree work he always did to the best of his abilities, taking pride in doing a good job. The past few years he became proficient in metal fabrication and millwright work. He was a veteran serving in the U.S. Air Force. Maverick enjoyed fishing, playing pool, horseshoes, bowling, watching football, laughter, his friends and his job. He truly loved his children and new granddaughter. Maverick was always willing to give a helping hand to his friends and neighbors. He is survived by his wife, Kara West of Avery; son, Jeremiah West, daughter Lindsey West, granddaughter, Teia Luckett. Also surviving are his parents, Marion and Dixie West of Albia. Maverick was preceded in death by his grandparents, Burton and Minnie West, Kenneth Nelson, Ruby (Nelson) Cole and cousin, Diane Conn. Cremation was accorded by family wishes. Memorial services will be held at 10:30 A.M. Monday, September 25, 2006 at the Avery United Methodist Church in Avery with Rev. Bud Lane officiating. The Howard Cessna Post No. 136 American Legion of Albia will conduct Military Rites at the Avery Methodist Church following the memorial service. Visitation is open after 12:00 Noon Sunday, September 24, 2006 at the Winfield Funeral Home in Albia with the family being present from 3-5 P.M. Sunday afternoon. Honorary bearers will be William Robertson, Monte Nelson and Jeremiah West, Dale Saffeels and Randy West. Memorials may be made to the family.

The family of Maverick Dean West created this Life Tributes page to make it easy to share your memories.

Send flowers to the West family.