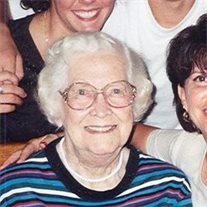 Mary Evelyn Foulkes, age 93, of Albia, Iowa died Saturday, January 7, 2006 at the Monroe Care Center in Albia. She was born November 13, 1912 in Wiggins, Colorado to Jesse Irvin and Mae E. (Scaffinger) Newell. Mary was a graduate of Albia High School, Class of 1930. After graduation she married John William Foulkes on June 25, 1930 in Albia. She was a homemaker, and also worked for Rexall Drug in Albia for over 30 years. She was a former member of Eastern Star & White Shrine. She was affiliated with the Avery United Methodist Church, and also a member of the First Christian Church in Albia. Mary is survived by two daughters; Janice Stuchel of Albia, and Suzanne Hood of Osawatomie, KS; 7 grandchildren; 13 great grandchildren; and 3 great great grandchildren. She was preceded in death by her parents; her husband, John; son-in-law, Donald Stuchel; granddaughter, Jolinda Suzanne Stuchel; great grandson Michael Joseph Montgomery. Evelyn is also preceded in death by three sisters, Hester Carle, Rosie Tharp, and Edith Nelson; and two brothers, T.I. Newell and Elvin Newell. Funeral services will be held at 2:00 P.M. Tuesday, January 10, 2006 at the Winfield Funeral Home in Albia with Rev. Lynda Carlson & Rev. Bud Lane officiating. Burial will be in Ottumwa Cemetery in Ottumwa, Iowa. Visitation will begin at 9:00 A.M., Tuesday, January 10 at the Winfield Funeral Home with the family present from 1:00 to 2:00 P.M., until service time. Memorials may be given to the Avery United Methodist Church. "You are our heart." Love, Your Family.

The family of Mary Evelyn Foulkes created this Life Tributes page to make it easy to share your memories.

Send flowers to the Foulkes family.