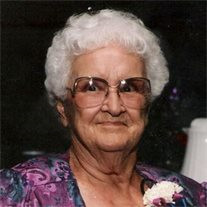 Mary Louise Casebolt, age 89, of Albia, Iowa died Saturday, October 21, 2006 at the Ridgewood Nursing & Rehabilitation Center in Ottumwa, Iowa. She was born November 7, 1916 in Melrose, Iowa to Thomas and Anna (Grady) Comer. She married Truman Edward Casebolt on February 28, 1948 in Kirksville, Missouri. He passed away on July 7, 1993. Mary was a homemaker and had worked as a waitress at the Bluebird Caf� in Albia for several years. She also worked at Chamberlain Manufacturing in Albia, from which she retired. She was a member of St. Mary's Catholic Church and of its Altar and Rosary Society. Her hobbies included quilting, playing cards and watching Chicago Cubs baseball. She is survived by three daughters, Delores (John) Frye and Sharon Casebolt both of Des Moines, Iowa and Deb (Ben) Johnson of Albia; 11 grandchildren and 10 great grandchildren. Also surviving is one brother, Mike Comer of Ottumwa, Iowa and two sisters, Helen Tierney of Des Moines and Patty Casebolt of Waverly, Iowa. Mary was preceded in death by her parents, husband, two sons: Leo Heyland and Eddie Casebolt; and one sister, Marge Hull and one brother, John Comer. Funeral services will be Tuesday, October 24, 2006 at 10:30 A.M. at St. Mary's Catholic Church in Albia, Iowa. Burial will be in St. Mary's Cemetery in Albia. Visitation will open after 3:30 P.M. Monday, October 23, 2006 at the Winfield Funeral Home in Albia with a 4:00 P.M. Rosary and a 6:30 P.M. Christian Wake service. The family will be present from 5-8 P.M. Monday evening at the funeral home. Casketbearers will be grandsons, Dennis and Mark Frye, Bill, Scott and Matt Casebolt, and Cody Frye. Honorary Casketbearers will be her granddaughters, Mindy and Michelle Johnson, Gina Duffy, and Brenda VanDenberg. Memorials have been established to Hospice of Wapello County or to the St. Mary's Catholic Church in Albia.

The family of Mary Louise Casebolt created this Life Tributes page to make it easy to share your memories.

Send flowers to the Casebolt family.