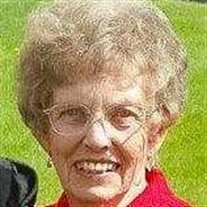 Mary Ann “Marianne” Crall, age 84, of Albia, passed away Thursday, Dec. 29, 2016, at the Comfort House in Pella. Mary Ann was born on Sept. 29, 1932 to Cornelius and Anna (Coleman) Ryan at their farmhouse in rural Melrose. She graduated as Valedictorian of the Class of 1950 from Melrose High School. She married the love of her life Patrick Crall at St. Patrick’s Catholic Church in Melrose on June 26, 1954. To this union, Pat and Mary Ann were blessed with five children. They shared 57 years of marriage before Pat’s passing on July 8, 2011. Mary Ann worked for the REA in Albia before her marriage to Pat. She later took a job at the Albia Shopper in the sales department before it was sold to the Albia Newspaper. She worked for the Albia Newspaper in the advertising department as a manager from 1976 until she retired in 1996. She also helped on the family farm with the bookkeeping. Mary Ann was the role model for a loving wife, farming partner, nurturing and devoted mother, loving sister, proud and active grandmother and great grandmother. She was also a loyal and caring friend as well as a faithful parishioner and church worker. Mary Ann had many talents. She enjoyed writing, journaling, composing poetry, baking, sewing, cooking, dancing with her husband Pat, and was an avid historian. Her real joy in life was spending time with her family and friends. Mary Ann’s Catholic faith was her anchor and she was proud of her Irish heritage. She was an active member of St. Patrick’s Catholic Church in Georgetown for over 60 years and thought nothing of baking eight to twelve pies for the annual God’s Portion Event. For years she enjoyed being a member of a Canasta Card Club and looked forward to the monthly gathering. She and her husband Pat were loyal to the Monroe County 4-H program and fair. Mary Ann remained on the family farm until early 2016 when she became a resident of Homestead Assisted Living in Albia. Mary Ann is survived by her children, Sharon Crall of Albia, Joe (Barb) Crall of Albia; Geralyn (Mark) Thomsen of Bettendorf and Marilyn (Danny) Teno of Moravia; 10 grandchildren, Molly (Neal) Mick, Ryan (Rachel), Nick, and Meghan Crall, Laura, Maureen, and Claire Thomsen, and Daniel, Julianna, and Collette Teno; two great-grandchildren, Annemarie and Grace Mick, two brothers, Art (Elaine) Ryan of Newton and David (Barb) Ryan of Panora; a sister-in-law, Marjorie Ryan of Pella and many nieces, nephews, cousins, and friends who were near and dear to her heart. She was preceded in death by her husband, Pat Crall; a daughter, “little” Mary Ann Crall; her parents, Cornelius and Anna Ryan; two brothers, Joe and James Ryan; and a niece, Mary Geraldine Ryan. A Mass of Christian Burial will be held at 10:30 a.m., Monday Jan. 2, 2017, at St. Patrick’s Catholic Church in Georgetown, with Father Mark Yates, C.PP.S., Father Michael E. Volkmer, C.PP.S., and Father Joe Miller, C.PP.S. as celebrants. Burial will follow services at St. Patrick’s Cemetery in Georgetown. Visitation will be held from 11 a.m. until 8 p.m., Sunday, Jan. 1, 2017, at the Tharp Funeral Home in Albia. Mary Ann’s family will be present throughout the day and evening. A rosary will be led Sunday at 4 p.m., and a Christian Wake Service will also be held at the funeral home, Sunday evening at 6 p.m. Memorials have been established to St. Patrick’s Church of Georgetown, or to the Iowa Chapter of the Cystic Fibrosis Foundation.

The family of Mary Ann "Marianne" Crall created this Life Tributes page to make it easy to share your memories.

Send flowers to the Crall family.