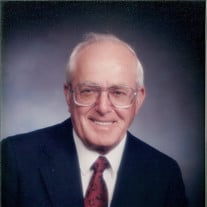 Marvin “Mike” Eugene Kness, age 96, of Albia, passed away on October 6, 2018, at the Monroe County Hospital in Albia, surrounded by his loved ones. Marvin was born on April 3, 1922 to A.E. and Bessie (Anderson) Kness in Audubon County, Iowa. He grew up and attended the Audubon High School graduating in 1941. After high school, Marvin joined the United States Army and was a member of the 1st and 4th Army Ranger Battalions and served his country during World War II in North Africa and Italy. He was very proud of his military service. On August 12, 1944 he was united in marriage to Phyllis Kauffman in Macon, Georgia. To this union 5 children were born, Kenneth, Julie, Jo, Kerry and Kevin. They shared over 45 years of marriage together until Phyllis’s passing on January 11, 1990. On February 12, 1992 Marvin married Marilyn Wimer-Mitchell in Florida. Upon returning home in 1945, he moved to Albia with his father and brothers and started Kness Manufacturing where he worked until retiring in 1985. He was a member of the American Legion and the Masonic Lodge. Marvin was a past member of the Albia Community School Board and served as President. He was inducted into the Albia Hall of Fame in 1991. He enjoyed golfing, hunting, fishing, and being outdoors. Above all, he enjoyed spending time with his family and friends. Marvin is survived by his wife, Marilyn Kness of Albia; his children, Kenneth (Merrilyn) Kness of Sun City West, AZ, Julie Stafford of Albia, Jo (Ray) VanderVelden of Indianola, IA, Kerry (Rhonda) Kness of Norwalk, IA, and Kevin (Rhonda) Kness of Albia; his step-daughters, Marilee (Mike) Scieszinski of Albia and Marianne (Phil) Crall of Des Moines, IA. 19 grandchildren, 32 great grandchildren and 4 great-great grandchildren. Marvin is also survived by many nieces and nephews. He is preceded in death by his parents, A.E. and Bessie Kness, his first wife, Phyllis Kness, his siblings, Nona Brown, Vera Alpers, Lester Kness, Wilma Mace, and Arnold Kness and two son-in-laws, Thomas Stafford and Jerry Archibald. Visitation will be held from 1:00 p.m. until 8:00 p.m. on Thursday, October 11, 2018, at the Tharp Funeral Home in Albia with Marvin’s family present from 4:00 p.m. – 8:00 p.m. to greet family and friends. Funeral services will be held at 10:30 a.m. on Friday, October 12, 2018, at the Trinity United Methodist Church in Albia, with Pastor Richard Grimes and Roger Henry officiating. Military honors provided by the American Legion of Albia, Lovilia and Melrose will follow services at the church. A private family burial will take place at a later date in Audubon, IA. A memorial established by the family to be determined at a later date.

The family of Marvin "Mike" Eugene Kness created this Life Tributes page to make it easy to share your memories.

Send flowers to the Kness family.