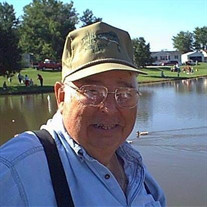 Marlin Ray Smith., age 84, of Green Acres, Melrose passed away on October 16, 2018, at his home under the care of EveryStep Hospice, surrounded by his loved ones. Marlin was born on November 23, 1933 in Whitten, Iowa to Harvey and Zula “Lorraine” Smith. He grew up and attended Eldora High School and graduated with the Class of 1951. On February 24, 1953 he was united in marriage to Shirley Trout at the Grace United Methodist Church in Marshalltown. To this union 4 children were born, Rene, Eric, Rhonda and Rosanne. Shirley and Marlin later divorced. On May 27, 1975 Marlin was married to Dorothy Yanda-Kriegel in Tucson, Arizona. Marlin was a tool and die maker at Kiowa in Marshalltown for 32 years. After retiring, he moved to Green Acres in 1995. In his younger years he liked playing basketball. He also enjoyed being outdoors, hunting, fishing, riding snowmobiles, attending and participating in stock car races, woodworking, bowling, watching NBA and Iowa Hawkeyes basketball games, golfing and playing cards at Little Bo’s in Marshalltown and Fat Annies in Moravia, especially cribbage and euchre. Above all else, he enjoyed spending time with his family and friends. Marlin is survived by his wife Dorothy Smith; 3 sons, Eric Smith, Don (Lynn) Kriegel and Tom (Michele) Kriegel; 7 daughters, Rhonda (Clifford) Nord, Rosanne (Monte) Brown, Gloria Lawless, Patty (Stanley) Allspach, Diana Fuchs Kriegel, Marsha (Doug) Kennedy and Sandy (David) Querrey; 24 grandchildren, 29 great grandchildren, 1 great-great grandchild; a sister, Zenna Faris and many nieces nephews, cousins and good friends. He is preceded in death by his parents, Harvey and Zula Smith; a daughter, Rene Perry; 2 brothers, Harvey and Marvin Smith; a sister, Delma; 4 sons-in-law, Roger Perry, Darrel Fuchs, Darold Lawless and Jim Osborn; and his first-wife Shirley. Visitation will be from 10:30 a.m. until 11:00 a.m. on Saturday, October 20, 2018, at the Tharp Funeral Home in Albia with Marlin’s family present to meet and greet family and friends. A memorial service will be held at 11:00 a.m. on Saturday, October 20, 2018, at the Tharp Funeral Home in Albia, with Pastor Don Efinger officiating. A private family burial will be held at a later date. Following the memorial service there will be a luncheon celebration of life at Green Acres Community building in Melrose. A memorial has been established to EveryStep Hospice.

Marlin Ray Smith., age 84, of Green Acres, Melrose passed away on October 16, 2018, at his home under the care of EveryStep Hospice, surrounded by his loved ones. Marlin was born on November 23, 1933 in Whitten, Iowa to Harvey and... View Obituary & Service Information

The family of Marlin Ray Smith created this Life Tributes page to make it easy to share your memories.