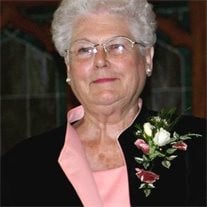 Marilyn Simmons Lathen, age 76, of Albia died Saturday, September 15, 2007 at Mercy Medical Center in Des Moines. She was born August 20, 1931 in Albia, Iowa to Thomas James and Lorena (Hunt) Morgan. Marilyn was a graduate of Albia High School, class of 1949. Later that year, on August 20, 1949, she married Leland Charles Simmons. They were married for 15 years and were raising four boys when he died on August 22, 1964. Marilyn remarried on May 1, 1968, to John "Jack" I. Lathen. Jack died February 14, 1989. Marilyn was a member of the Trinity United Methodist Church, and the Hospital Auxiliary, both of Albia. She worked at various places including Northern Propane Gas and Super Value, both in Albia. Marilyn enjoyed watching her grandchildren play football and participate in their other activities. Marilyn is survived by her four sons; David and his wife Kimberly Simmons of Excelsior Springs, MO, Tim and his wife Cindy Simmons of Albia, John and his wife Jana Simmons of Albia, and Terry and his wife Anita Simmons of Albia; three step children, Cindy Wiltse of Sweet Water, TX, Ben and his wife Denise Lathen of Abilene, TX, and Sam and his wife Tara Lathen of Ft. Worth, TX; 21 grandchildren; and 26 great grandchildren. She is also survived by one brother Lyle and his wife Kae Morgan of Lovilia; one sister, Phyllis Conner and Ray Mosbarger of Albia, one sister in law, Debbie Morgan of Newton; and one brother in law, Ed Chidester of Albia. Marilyn is preceded in death by her parents; her husbands, Leland Simmons and John "Jack" Lathen; one grandson, Jason Simmons; and one granddaughter, Shanna Johnson. One sister, Norma Jean Chidester; and one brother, Larry Morgan also preceded Marilyn in death. Funeral services will be held at 10:30 A.M. Tuesday, September 18, 2007 at the Trinity United Methodist Church in Albia with Rev. Kevin Leveck officiating. Burial will follow in Oak View Cemetery in Albia, Iowa. Visitation will open after 12:00 Noon, Monday, September 17 at the Winfield Funeral Home in Albia with the family present from 6-8 P.M. Monday evening. In lieu of flowers, donations will be accepted to establish a memorial fund in Marilyn's name.

The family of Marilyn Ann Simmons Lathen created this Life Tributes page to make it easy to share your memories.