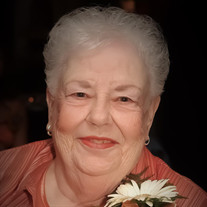 Marie Arlene Griffin, age 90, of Albia, passed away Monday, December 26, 2016, at the Monroe Care Center in Albia. Marie was born October 17, 1926, in Iconium, Iowa to Leslie S. and Fern D. (Sheldon) Derby. She graduated from Albia High School, class of 1943. On December 29, 1947, she married Louis Griffin at St. Patrick’s Catholic Church in Melrose. To this union, 3 children were born, Steve, Sue, and Denny. They shared 42 years of marriage prior to Louie passing away on October 14, 1990. Marie worked at the Arsenal in Burlington to support the efforts in World War II and then at Loeb’s in Albia. Together they purchased Albia Granite Company in 1953, where they owned and operated for 32 years. She was a member of St. Mary’s Catholic Church in Albia and St. Mary’s Altar and Rosary Society. Marie was great at cooking and baking and was known for her fresh popped popcorn, peanut brittle, pumpkin bars, scotcharoos, and rum cake. Marie loved attending her grandchildren’s sporting events and most of all, spending time with her family and friends. Marie is survived by three children, Steve (Judy) Griffin of Altoona; Sue (Mike) Shroyer of Albia, and Denny (Ann) Griffin of Urbandale; 5 grandchildren, Chris (Candy) Shroyer, Shawn (Tammy) Shroyer, Melissa (Scott) Woodruff, Mandi Shroyer (Jack Peterson), and Monica (Jesse) Burress; 13 great grandchildren; and 2 sister-in-laws, Irene Derby and Marie Griffin. She is also survived by many nieces, nephews, and cousins. She was preceded in death by her husband, Louis; her parents, Leslie and Fern; a great granddaughter, Kinsley Burress; a sister, Mildred Golden; and a brother, Leo Derby. A Mass of Christian Burial will be held at 11:00 a.m., Thursday, December 29, 2016, at St. Mary’s Catholic Church in Albia, with Father Michael E. Volkmer, C.PP.S. officiating. Burial will follow services at St. Mary’s Cemetery in Albia. Visitation will be held from 4:00 p.m.- 8:00 p.m. Wednesday, December 28, 2016, at the Tharp Funeral Home in Albia, with Marie’s family present throughout the afternoon and evening. A 4:00 p.m. rosary will be led by St. Mary’s Altar and Rosary Society and a wake service will be held at 6:00 p.m. We have chosen these two special memorials Tuberous Sclerosis Complex and/or Multiple Sclerosis Foundation, as a great granddaughter and granddaughter-in-law suffer from these conditions.

The family of Marie Arlene Griffin created this Life Tributes page to make it easy to share your memories.

Send flowers to the Griffin family.