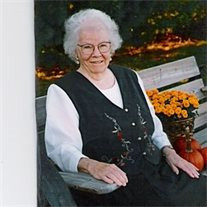 Mariam Josephine Johannes, age 92, of Albia, died Thursday morning, December 6, 2007 at the Monroe Care Center in Albia, Iowa. Mariam was born on June 7, 1915 in Hiteman, Iowa to Ralph and Mary (Briordy) Kent. She was a graduate of Hiteman... View Obituary & Service Information

The family of Mariam Josephine Johannes created this Life Tributes page to make it easy to share your memories.

Send flowers to the Johannes family.