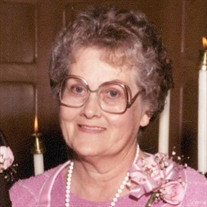 Margaret Elizabeth Dage, age 93, of Albia, passed away on Sunday, February 18, 2018, at the Monroe Care Center in Albia. Margaret was born on December 10, 1924, in Minneapolis, Minnesota to Elmer and Mary Ellen (Wagoner) Mason. She graduated from Patrick Henry High School in Minneapolis. Later in life she received her RN degree in Nursing. On January 1, 1945, she married Lawrence Oliver Dage in Akeley, Minnesota. They shared 60 years of marriage before Lawrence’s passing on May 20, 2005. Margaret was a homemaker and foster parent while she raised her children and later worked at the VA Hospital in Knoxville as a head nurse until her retirement. A strong woman of faith, she was a member of the Monroe County Church of the Brethren where she was active in teaching Sunday school and Bible school and was in the Ladies Aid Group. She also was active in helping her children with 4-H. She enjoyed music and in her younger years, she along with her sister and cousin sang on the radio in Minnesota. After moving to Albia, she sang with the Sweet Adelines. She enjoyed sewing, quilting and being outdoors. Margaret was a very loving and caring person that always put others before herself. Her real joy in life was spending time with her family and friends. Margaret is survived by her children, Ron (Karen) Dage of Amana, Iowa, Becky Lynn Roberts of Albia, Thomas (Carol) Dage of Gladstone, MO; 2 grandchildren, Larry and Michelle; and several great grandchildren. Margaret is also survived by 4 sisters, Edith Jackson of Albert Lea, MN, Lois Nefstead and Eunice Johnston both of Rice Lake, WI, and Jean Gustafson of Minneapolis, MN; and many nieces, nephews, cousins, and good friends. She is preceded in death by her husband, Lawrence Dage; a son in infancy, Timothy Paul Dage; a foster-son, Howard Lee Pearce; her parents, Elmer and Mary Mason; 2 sisters, Ruth Hendricks and Josephine Dage; and 4 brothers, Orville, Ralph, Clark, and Robert Mason. Visitation will be held from 3:00 p.m. until 8:00 p.m., Friday, February 23, 2018, at the Tharp Funeral Home with Margaret’s family present from 5:00 p.m. to 8:00 p.m. to greet family and friends and will reopen at 9:30 a.m. until time of the service on Saturday, February 24, 2018. A memorial service will be held at 10:30 a.m., Saturday, February 24, 2018, at the Tharp Funeral Home in Albia. Burial will follow services at Cuba Cemetery in Albia, Iowa.

Margaret Elizabeth Dage, age 93, of Albia, passed away on Sunday, February 18, 2018, at the Monroe Care Center in Albia. Margaret was born on December 10, 1924, in Minneapolis, Minnesota to Elmer and Mary Ellen (Wagoner) Mason. She graduated... View Obituary & Service Information

The family of Margaret Elizabeth Dage created this Life Tributes page to make it easy to share your memories.

Margaret Elizabeth Dage, age 93, of Albia, passed away on Sunday,...

Send flowers to the Dage family.