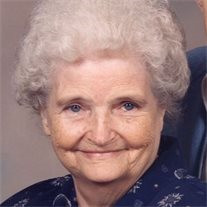 Maggie E. Goff, age 83, of Albia died Thursday, February 2, 2006, at the Monroe County Hospital in Albia, Iowa. Maggie was born November 11, 1922, in Ardmore, Missouri; the 6th child of 15 born into the family of Herbert W. and Maggie Mae Wallace Wilson. On December 14, 1949 she married Ralph Edward Goff in Moberly, Missouri. In this marriage they raised ten children. As a young adult Maggie worked in the Kansas City Defense Plant during World War II, building B24 planes. She had worked as a nurse's aide at Woodlawn Hospital in Moberly, MO as well as in Macon, MO. In 1961 Maggie's husband, Ralph, was transferred with the Wabash Railroad and they moved their family to Albia. Maggie then worked as a nurse's aide at the Albia Manor. She was a long time member of the Albia Open Bible Church, presently known as Cornerstone Community Church. Over the years she had served as Church Treasurer and in the local Women's World Fellowship organization she served as President, Vice-President, Missions Leader and Spiritual Life Leader; as well as teaching the Primary Sunday School Class and Vacation Bible School. Her legacy to her family is her example of love for her Lord, Jesus Christ, to her family, and to her church. Maggie was preceded in death by her parents, her husband, Ralph Goff, and one son, Russell Allen Goff; three sons-in-law, Don Carter, Ron Bettis, and Gary DeMoss; three grandsons, and one granddaughter, and one great grandson, as well as five brothers, Delmer, William, Floyd, Herbert, Lewis Gene; and three sisters, Lucille Wilson, Mary Wilson Goff and Maggie Susan Wilson, who died in infancy, as well as two unnamed siblings that were stillborn. Maggie is survived by nine children: Patsy Carter of Las Vegas, NV, Bonnie (Randy) Burkiett of London Mills, IL Donald (Maria) Goff of Orlando, FL, Ralph (Tracey) Goff of Oviedo, FL, James (Lori) Goff of Converse, IN and Patty Bettis, Gracie DeMoss, Brenda (Mike) Ryan, and Margaret (John) Pyle all of the Albia area. One brother, Luther Wilson of Iowa City and three sisters: Loraine Wilson Hall of Macon, MO, Helen Wilson Goff of Kingsport, TN and Lenna Wilson Carter of Decatur, IL. Maggie, who received endless joy from the children in her family, is survived by twenty-nine grandchildren, 42 great grandchildren, and 4 great-great grandchildren, whom she held close in her arms as well as in her heart, covering them in her prayers. Funeral services will be held Monday, February 6, at 1:00 P.M. at the Cornerstone Community Church, with Rev. Rick Smith officiating. Burial will be at Cuba Cemetery. Visitation will open after 10:00 A.M. Sunday, February 5 at the Winfield Funeral Home in Albia with the family present from 2-4 and 6-8 P.M. on Sunday. Memorials have been established to the Cornerstone Community Church in Albia.

The family of Maggie Elaine Goff created this Life Tributes page to make it easy to share your memories.

Send flowers to the Goff family.