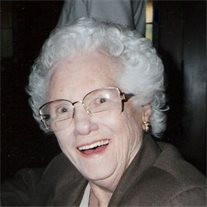 Drentha Mae Mitchell, age 88, of Albia, Iowa died Thursday, September 28, 2006, at the Monroe County Hospital in Albia. Drentha was born March 6, 1918 in Albia, Iowa to Ira Earl and Amy Francis (Murphin) Burlingame. She married James David "J.D." Mitchell in Albia. J.D. died on April 13, 1993. Drentha attended high school and one year of college at William Penn in Oskaloosa. She was a supervisor of housecleaning at the Monroe County Hospital until her retirement. Drentha loved to crochet, quilt, playing bingo, and cribbage tournaments. Drentha was also an avid bowler and loved to dance. Drentha is survived by her children Michele Bowers of Des Moines, Iowa, Vicki Wheatcraft of Colfax, Iowa, and Evelyn Reynolds of Burlington, Iowa. Drentha is also survived by 9 grandchildren, and 13 great grandchildren. Drentha is preceded in death by her parents: her husband: J.D. Mitchell: one son, Michael Mitchell; and three brothers, Keith, Kenneth, and Bill Lewis. Funeral services will be held at 11:00 A.M., Monday, October 2, 2006, at the Winfield Funeral Home in Albia. Burial will follow services at the Oak View Cemetery in Albia. Visitation will be held from 5 to 8:00 P.M., with the family present, Sunday, October 1, 2006, at the Winfield Funeral Home in Albia. An open memorial has been established.

The family of Drentha Mae Mitchell created this Life Tributes page to make it easy to share your memories.

Send flowers to the Mitchell family.