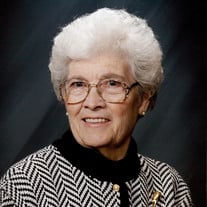 Luella May Scholtus, age 90, of Albia, passed away Thursday, August 25, 2016, at Oakwood Nursing and Rehabilitation Center in Albia. Luella was born May 28, 1926 in Tilton, IA, to Orlin and Dorothy (Davis) Chapman. She grew up and attended school in Thornburg, Iowa. On October 28, 1944, she was united in marriage to Gerrit Scholtus in Oskaloosa. They shared nearly 50 years of marriage until Gerrit’s passing on March 25, 1995. Luella was a homemaker throughout her life but also had jobs working at the Continental Overall Factory in Knoxville and Oskaloosa Overall Factory, Chamberlains and Oakwood Nursing and Rehabilitation in Albia. She was very strong with helping the volunteer programs in the Albia Community and was a member of the Monroe County Hospital Auxiliary Board. She enjoyed being outdoors, gardening, canning, crocheting, cooking, baking, making homemade bread and had a love for birds and dogs. Her real joy in life was spending time with her family and friends and keeping the cookie jar full for her grandchildren. She is survived by her children, Patty Saunier of Hondo, TX, Michael (Pat) Scholtus of Oskaloosa, Art (Lorraine) Scholtus of Ottumwa, Charlie (Linda) Scholtus of Albia, Marjorie (Tom) Demoss of Avery, and Rich (Linda) Scholtus of Moravia; 11 grandchildren, Daryl, Lisa, Loree, Wes, Jackie, Ed, Dan, Josh, Anne, Tammy, and Brian. Luella is also survived by numerous great grandchildren; a sister, Mary Applegate of Williamsburg; a half-sister, Jo Anna Chapman and a half-brother, John Chapman. Luella is preceded in death by her husband, Gerrit; her parents, Orlin and Dorothy; a sister, Dorothy; a brother, Bill and a half-brother, Frank. A visitation will be held at the Tharp Funeral Home in Albia, on Sunday, August 28, 2016 from 2:00 p.m. - 8:00 p.m. with Luella’s family present from 5:00 p.m. – 8:00 p.m. to greet family and friends. Funeral Services will be held at 10:30, Monday, August 29, 2016 at the Tharp Funeral Home in Albia, with Pastor Richard Grimes officiating. Burial will follow service at Oak View Cemetery in Albia.

Luella May Scholtus, age 90, of Albia, passed away Thursday, August 25, 2016, at Oakwood Nursing and Rehabilitation Center in Albia. Luella was born May 28, 1926 in Tilton, IA, to Orlin and Dorothy (Davis) Chapman. She grew up and attended... View Obituary & Service Information

The family of Luella May Scholtus created this Life Tributes page to make it easy to share your memories.

Luella May Scholtus, age 90, of Albia, passed away Thursday,...

Send flowers to the Scholtus family.