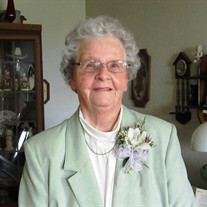 Lucille (Laidlaw) Bettis, age, 94 of Albia, passed away Friday, September 22, 2017, under the care of HCI Hospice at Golden Age Care Center in Centerville. Lucille was born December 9, 1922, in Rexfield, Iowa to George D. and Ethel (Hankins) Laidlaw. She attended school in Rexfield through part of 8th grade, when the family moved to Albia, where she graduated from Albia High School, with the Class of 1940. She attended Albia Jr. College and worked in the high school office. She married Herbert E. Bettis on December 27, 1941, in Kirksville, Missouri. They shared 54 years of marriage before Herbert’s passing on May 26, 1995. To this union five children were born, Larry, Linda, Lysle, Lloyd and Leslie. She worked as a secretary and parish assistant at the First Methodist Church and Trinity United Methodist Church for 22 years. As a member of Trinity United Methodist Church, Lucille was active in the U.M. W. and served on many committees of the church. She served as 4-H leader for 20 years, worked in the Monroe County Cancer Society for 35 years, helped organize the Monroe County Hospital Auxiliary and the Meals on Wheels program, and was active in the P.T.A. at the Spencer Rural School and Jefferson School in Albia. She was a 50 year member of the Albia Woman’s Club. In 1962, the Bettis family was named the Methodist Family of the Year, a national honor. In 1966, she was chosen as a Master Farm Homemaker. Lucille and Herbert were inducted into the Albia Hall of Fame in 1988. In 1979, she was named “Woman of the Year” by ETA RHO Chapter of Beta Sigma Phi. Lucille was named to the Albia High School Wall of Fame in 1997 and to the Iowa 4-H Hall of Fame in 2002. Lucille is survived by her five children, Larry (Sharon) Bettis, Linda (Vince) Sullivan, both of Centerville, Lysle (Jerry) Meyer of Kirksville, MO, Lloyd (Kathryn) Bettis of Glenview, IL and Leslie (Suzanne) Bettis of Des Moines; 16 grandchildren; 26 great grandchildren; 5 great-great grandchildren and many nieces, nephews and good friends. She was preceded in death by her husband Herbert; her parents, George and Ethel; and two brothers, Leonard and Lyle Laidlaw. Funeral services will be held at 11:00 a.m., Tuesday, September 26, 2017, at Trinity United Methodist Church in Albia, with Pastor Roger Henry and Pastor Marvin Lindley co-officiating. Burial will follow the service at Oak View Cemetery in Albia. Visitation will begin at 2:00 p.m. until 8:00 p.m., Monday, September 25, 2017, at Tharp Funeral Home in Albia with a time of sharing at 7:00 p.m. with Lucille’s family present throughout the day and evening to greet family and friends. Memorials may be made to Trinity United Methodist Church or to the Monroe County 4-H Foundation may be directed to the Tharp Funeral Home at 116 Benton Ave. West, Albia, Iowa 52531.

The family of Lucille Bettis created this Life Tributes page to make it easy to share your memories.

Send flowers to the Bettis family.