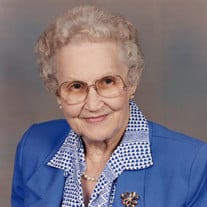 Lucille Rosella Belzer, age 95, of Albia passed away peacefully on Saturday, March 25, 2017, at the Monroe Care Center in Albia. Lucille was born June 3, 1921, to Firm and Nellie (Barnett) Smith on the family farm outside of Eddyville, Iowa. She grew up and attended the Eddyville High School, graduating with the Class of 1939. After high school she attended William Penn College where she received her teaching certificate, later in life she attended Liberty College and Logos Christian College for Biblical Studies. In 1940 she was united in marriage to Clifford Belzer at her parent’s home. To this union two children were born, Janet and Gary. Lucille and Clifford shared 52 years of marriage together until his passing on October 26, 1992. She taught school and also worked for the Monroe County Treasurer’s office and was a bookkeeper at Belzer Tractor for many years. She was a member of the First Christian Church in Eddyville, Bethel and Albia. Lucille was active in the Christian Women Fellowship Group and taught Sunday school. She was always a teacher and was always willing to help children learn. She enjoyed being outdoors in her flower garden, quilting and wintering in Texas with Clifford where they would attend square dances. Her real joy in life was spending time with her family and friends. Lucille is survived by her children, Janet (Dale) Maddison and Gary (Connie) Belzer; five grandchildren, Mike (Gina) Maddison, Bill (Michele) Belzer, Michele Henderson, Paul Belzer, and Dan (Anna) Belzer; 17 great grandchildren; 1 great-great grandchild; 3 sisters-in-law, Madelyn Belzer, Joan Belzer, and Alma Smith. She is also survived by many nieces and nephews. She was preceded in death by her husband Clifford; her parents, Firm and Nellie; and a brother, Dale Smith. Funeral services will be held at 10:30 a.m., Tuesday, March 28, 2017, at the First Christian Church in Albia, with Pastor Lynda Carlson officiating and Pastor Roger Henry co-officiating. Burial will follow the service at the Oak View Cemetery in Albia. Visitation will be held from 1:00 p.m. until 8:00 p.m., Monday, March 27, 2017, at the Tharp Funeral Home in Albia, with Lucille’s family present from 6-8 p.m. to greet family and friends. A memorial has been established to the First Christian Church or Trinity United Methodist Church.

Lucille Rosella Belzer, age 95, of Albia passed away peacefully on Saturday, March 25, 2017, at the Monroe Care Center in Albia. Lucille was born June 3, 1921, to Firm and Nellie (Barnett) Smith on the family farm outside of Eddyville,... View Obituary & Service Information

The family of Lucille Rosella Belzer created this Life Tributes page to make it easy to share your memories.

Send flowers to the Belzer family.