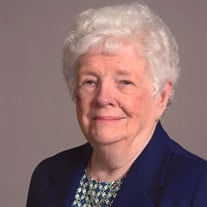 Louise Ann Kosmach, age 85, of DeWitt, IA, passed away on Sunday, November 24, 2019, at the University of Iowa Hospital in Iowa City, IA. Louise was born on January 16, 1934, in Hiteman, IA, to James Wilbur and Alice Louise (Kent) Mullinix. She grew up and attended school in Albia, graduating from the Albia High School with the Class of 1951. On February 23, 1952, she was united in marriage to Johnny Junior Kosmach in Oskaloosa, IA. Louise and Johnny shared 46 years of marriage prior to Johnny passing away on June 13, 1998. Louise was a kind and loving mother, who enjoyed being with her family. She was a wonderful cook and enjoyed sewing and making quilts. Hobbies that she enjoyed were researching family genealogy, reading and painting. She had a strong religious belief and was a member of St Joseph’s Catholic Guild. Her sense of humor and personality will be missed by all. Louise is survived by 4 sons, John (Kathy) Kosmach of Jonesboro, Arkansas, George (Mary) Kosmach of Clearwater, KS, Frank (Madonna) Kosmach of Bloomington, Minnesota and Jim (Laura) Kosmach of Geneva, Illinois; 3 daughters, Bonnie (Bill) Cline of DeWitt, Iowa, Mary (Dean) Porter of Biloxi, Mississippi, and Alice Kosmach of Hot Springs, Arkansas; 14 grandchildren; 12 great grandchildren; 2 brothers, James (Rosalie) Mullinix of Albia and Ralph (Priscilla) Mullinix of Loveland, CO; a sister, Wanna Shaw of Loveland, CO; a brother-in-law, Joe (Louise) Kosmach of Albia; and 2 sisters-in-law, Fran Knoot of Oskaloosa, Iowa and Erma Kosmach of Cedar Rapids, Iowa. Louise is also survived by numerous nieces and nephews. She is preceded in death by her husband, John Kosmach; her parents, Wilbur and Alice Mullinix; a grandson, Alex Kosmach; a brother, Jean Mullinix; and 2 sisters, Carol (Mullinix) Gardner and Laura Mullinix. A Rosary will be held at 9:00 a.m. on Saturday, November 30, 2019, at St. Mary’s Catholic Church in Albia. Visitation will follow the rosary until the time of service with Louise’s family present to greet family and friends. A Mass of Christian Burial will be held at 10:30 a.m., Saturday November 30, 2019, at St. Mary's Catholic Church in Albia, with Fr. Mark Yates, C.PP.S. officiating. Burial will follow services at Oak View Cemetery in Albia. An open memorial has been established to be determined at a later date.

The family of Louise Ann Kosmach created this Life Tributes page to make it easy to share your memories.

Send flowers to the Kosmach family.