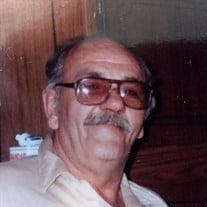 Louis Edward Wilcoxson, age 81, of Ottumwa, passed away on April 22, 2018, at his home in Ottumwa, under the care of Hospice of Wapello and Davis County. Louis was born on October 25, 1936, in Kirkville, IA, to Samuel and Ethel (Locke) Wilcoxson. He grew up and attended school in Monroe County. He married Nigel Jeanne Ingles on August 23, 1958, in Odin, IL. To this union, 3 children were born, Pamela, Keith, and Vince. Louis served his country in the United States Air Force. He later was an over the road truck driver for many different companies. He was a member of the American Legion in Albia and in his younger years, was a member of the Moose Lodge in IL. Louis enjoyed traveling, which his career as a truck driver enabled him to do. He has been in 48 states and achieved the Million Miles Club honor multiple times. Louis enjoyed collecting eagle figurines and had a love for watching them in the wild. Above all, he loved spending time with his family and friends, especially his grandchildren. Louis is survived by his wife of 59 years, Nigel Wilcoxson; his children, Pamela (Sam) Rominger, Keith (Erlinda) Wilcoxson, and Vince (Karen) Wilcoxson; 5 grandchildren, Natashia, Martin (Katy), Richard (Erin), Kayla (Eric), and Karissa (Clayton); 7 great grandchildren, Drake, Austin, Isis, Kateri, Desiree, Isabella, Olive, and one on the way. Louis is also survived by several nieces, nephews, cousins and good friends. He is preceded in death by his parents, Samuel and Ethel; a sister, Margaret Nupp; and 3 brothers, Earl, Sam, and Ervin Wilcoxson. Visitation will be held from 2:00 p.m. until 8:00 p.m., Thursday, April 26, 2018, at the Tharp Funeral Home with Louis’s family present from 5:00 p.m.-8:00 p.m. to greet family and friends. A funeral service will be held at 1:00 p.m., Friday, April 27, 2018, at the Tharp Funeral Home in Albia with Pastor Brad Gray officiating. Burial with military rites provided by the American Legion of Albia, Melrose, and Lovilia, will follow services at Oak View Cemetery in Albia A memorial has been established to the family.

Louis Edward Wilcoxson, age 81, of Ottumwa, passed away on April 22, 2018, at his home in Ottumwa, under the care of Hospice of Wapello and Davis County. Louis was born on October 25, 1936, in Kirkville, IA, to Samuel and Ethel (Locke)... View Obituary & Service Information

The family of Louis Edward Wilcoxson created this Life Tributes page to make it easy to share your memories.

Louis Edward Wilcoxson, age 81, of Ottumwa, passed away on April...

Send flowers to the Wilcoxson family.