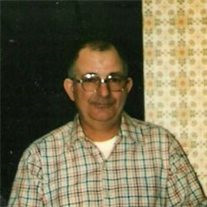 Louis Arthur "Bud" Morrow, age 77, of Albia, Iowa died Thursday, September 13, 2007 at the Iowa Methodist Medical Center in Des Moines. He was born November 22, 1929 in Eldon, Iowa to Rollie and Faith (Keller) Morrow. He married Pauline (Craig) Drury at the United Methodist Church in Lovilia. Bud was a graduate of Eldon High School. He then entered the Service, serving for the United States Navy during the Korean War. After the service he worked for the Rock Island Railroad, and then later worked and retired from Dexter Company in Fairfield. He was a member of the New Hope Masonic Lodge #480 in Eldon, joining in 1951. He was also a member of the American Legion Howard Cessna Post No. 136 of Albia. Bud is survived by his Wife, Pauline Morrow of Albia; step-son, Larry Price of Albia; step-daughter, Deb Dye of Knoxville; two sisters, Carolyn Cook of Eldon, and Shelia Adamson of Agency; one brother, Gene Morrow of Phoenix, AZ. Several nieces, nephews, step-grandchildren, and extended family, Lily Price also survive Bud. His parents; one sister, Frances Damm; one brother, Robert Morrow, and one step-grandson, Justin Bossard precedes Bud in death. Visitation will be from 3:00 P.M. to 5:00 P.M. Sunday, September 16, 2007 at the Winfield Funeral Home in Albia with the family present. Memorial Services will be held at 5:00 P.M. Sunday, September 16, 2007 at Winfield Funeral Home in Albia. Memorials may be given to the family.

The family of Louis Arthur Morrow created this Life Tributes page to make it easy to share your memories.

Send flowers to the Morrow family.