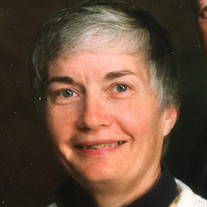 Linda Elaine (Chance) Kendall, wife of 55 wonderful years, mother, “grams” and friend went home to be with her husband, her daughter and Jesus on Thursday, March 16, 2017. This spirited woman was born on October 5, 1942 to Alva and Pauline (Hittle) Chance of Lovilia. She was the third oldest of six siblings, Jim (and the late Alice) Chance, Duane & Betty Chance, Bobby and Linda Chance, Jim and Nancy Lenger and Carolyn Chance. She graduated from Albia High School. After high school she worked for Mr. Cash as his secretary. She then married her devoted husband, Dayton on January 7, 1962. They had two children, Dee and Larry Kendall. She relished listening to the music of her husband’s band, quilting, working at all things that truly involved hard work, camping on the river when the kids were young, playing cards, being out on the farm and caring for everything from the farm cats to the sheep to the calves. She was rarely the center of attention but enjoyed spending time with her family and friends and the great company that they provided. She was always seen assisting her husband in the community for the Rotary and the Chamber of Commerce. She relished all the work on the farm and was checking cows daily on her UTV for baby calves up to her last day at home. She loved helping her husband in business and went back into the work force after they purchased the local Gambles Hardware Store in 1982. She did the same for her son, Larry, as he started his businesses and helped with everything from answering phones to keeping the books. When Larry needed help with Muddy Outdoors, she was right there helping Dayton as he ran the pallet jack to get those enormous containers unloaded. She was always telling Dayton of their next project to help others or family. She was meticulous in her bookkeeping for the family businesses and was as frugal as they come. Much to the chagrin of the office staff at Quiktron, she would have them repeatedly pull the ink cartridges out and shake them before she would order a new one. She would never spend more than a few dollars on a pair of shoes and that did not change until the grandkids started arriving. She was a constant presence in their lives, even moving onto the farm with Larry and G in her later years. There was nothing that the grandkids didn’t “need”. We still laugh about the year that Gage received a stuffed catfish for Christmas. She leaves her son Larry and his wife Gervaise Kendall and three grandchildren, Gage, Lainy & Jack to carry on in her absence. Funeral Services will be held at 10:30 a.m. on Wednesday, March 22, 2017 at the Tharp Funeral Home in Albia, with Pastor Richard Grimes officiating. Burial will follow services at Osborn Cemetery in Lovilia. Following the committal service there will be a luncheon at the Trinity United Methodist Church in Albia. Visitation will be held from 3:00 p.m. to 8:00 p.m. on Tuesday March 21, 2017 at Tharp Funeral Home in Albia, with Linda’s family present 6 to 7:30 p.m. to greet friends and family. Memorials may be made out to Osborn Cemetery.

The family of Linda (Chance) Kendall created this Life Tributes page to make it easy to share your memories.