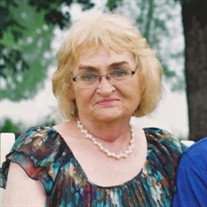 Linda Kaye Chance, age 73, of Lovilia, IA, passed away on Sunday, March 21, 2021, surrounded by her loved ones at her home in Lovilia, under the care of Care Initiatives Hospice. Linda was born on December 22, 1947, to Winston W. and Lorene Louise (Lepley) Pace in Osceola, IA. She grew up and attended school at Moulton-Udell, graduating with the Class of 1966. Linda later attended Indian Hills Community College where she took clerical classes. In 1966, she was united in marriage to Merle David Bronson and to this union 2 children were born, Michael and Randy. Linda and Merle later divorced. On June 30, 1973, she was united in marriage to Bobby Chance at the Bussey Independence Church. Linda worked at Monroe Plastics in Albia before going to work as a secretary at Chamberlains. She then went to work as a secretary for REC in Albia where she worked for 26 years. Linda was an extremely talented seamstress and had her own business, Linda’s Quilting. She had her own quilting machine and did quilting work for many people over the years. She was a member of the Crazy Quilter’s Club, Sewing Sisters, the Veteran’s Peace Quilters, and also loved to quilt with her sisters. Linda enjoyed watching game shows, especially Jeopardy and Wheel of Fortune. She also enjoyed playing the slot machines at the casinos and in Las Vegas. She was a very loving and generous person and was a caretaker for many family members. Family was everything to Linda and she cherished the time spent with them, especially her grandchildren and great grandchildren. Linda is survived by her husband, Bobby Chance of Lovilia; her 2 sons, Michael Bronson of Del City, OK and Randy (Marla) Bronson of Albia; 5 grandchildren, Ashli (Travis) Ryan, Alexander Harjo, Danny Bronson, Derik (Olivia) Bronson, and Drake (Jasmine) Bronson; 4 great grandchildren, Victoria Santiago and Liam, Lincoln, and Isaiah Bronson; siblings, Wanda Selvy of Lovilia, Mary Wilson of East Moline, IL, Judy Stevenson of Moulton, Thressa (Jimmy) Robinson of Centerville, Connie (Jodie) Gillaspie of Albia, Lucy (Ron) Elswick of Albia, and Winston Jr. (Vicki) Pace of Udell; and a brother-in-law, Mike Stevens. Linda is also survived by several in-laws, nieces, nephews, cousins, and good friends. She was preceded in death by her parents, Winston and Lorene Pace; a sister, Janet Stevens; and brothers-in-law, Robert Selvy, Jay Wilson, and Oren Dale Stevenson. Visitation will be held from 2:00 p.m.-8:00 p.m. on Wednesday, March 24, 2021, at the Tharp Funeral Home in Albia, with Linda’s family present from 5:00 p.m.-8:00 p.m. to greet family and friends. Funeral services will be held at 10:30 a.m., Thursday, March 25, 2021, at the Tharp Funeral Home in Albia with Pastor Richard Grimes officiating. Burial will follow services at Osborn Cemetery in Monroe County, IA. In lieu of flowers, a memorial has been established to the Crazy Quilter’s Club or the Welcome Home Soldier Monument in Albia.

Linda Kaye Chance, age 73, of Lovilia, IA, passed away on Sunday, March 21, 2021, surrounded by her loved ones at her home in Lovilia, under the care of Care Initiatives Hospice. Linda was born on December 22, 1947, to Winston W. and Lorene... View Obituary & Service Information

The family of Linda Kaye Chance created this Life Tributes page to make it easy to share your memories.

Send flowers to the Chance family.